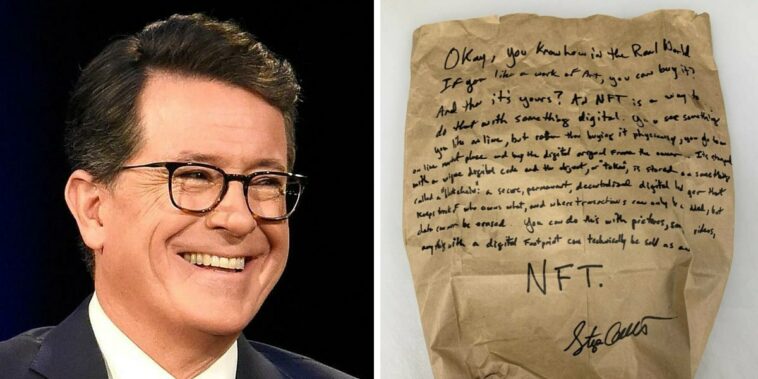 The late-night talk show host Stephen Colbert announced yesterday that his first “AFT” – a riff off of the popular and sometimes confusing new technology known as NFTs – sold for $33,000.

The money raised from the paper-bag “AFT” will be given to a charity for public school teachers called Donors Choose.

The object was created on his show in November and consists of his definition of non-fungible tokens written on a paper bag. Stephen proudly deemed his creation the “world’s first AFT.” Or “Actual F-ing Thing.”

Colbert hasn’t been the only one busy explaining NFTs to the nation. In 2021, Collins Dictionary reported “non-fungible token” or “NFT” was the most searched word of the year. The same year also saw the NFT market soar to over $25 billion – and reports of total NFT sales have been even higher.

Colbert’s hilarious definition of non-fungible tokens mentioned some questionable NFT projects before ending in a sort of dazed befuddlement.

“Is this what it feels like to be John Oliver?” the comedian riffed, alluding to the fact his fellow comedian and late-night host is more prone to explaining complicated subjects.

He also added that the point of his explanation was that there’s “real money being spent on all this fake stuff.”

Now real money – $33,000 to be exact – has been spent on a paper bag Colbert ate his lunch out of back in November.

Perhaps funniest of all, is that the bag – which sold on eBay – may now hold real value as a keepsake from a time before most people had an idea about what NFTs were and how they could shape the future.

Colbert Creates an NFT From His “AFT” Paper Bag

Not one to miss the irony, Colbert is taking the riff one step further and has partnered with Terra Virtua to design a special NFT collection for fans. The NFTs consist of a digitalized Colbert holding his “AFT” paper bag explaining NFTs.

The NFT collection is titled “Colbert vFlect” and is hosted on the Polygon blockchain — a carbon-efficient blockchain known for lightning-fast speeds and small transaction fees.

While Colbert previously admitted his ignorance when it came to understanding NFTs – albeit hilariously – it now appears he recognizes the value in creating a collection of digital assets.

And the silly NFT collection from Colbert has a serious side to it. All the funds raised from the 10,000-piece NFT collection, available for $10 each on terravirtua.io/Colbert, will be given to support public school teachers at Donors Choose.