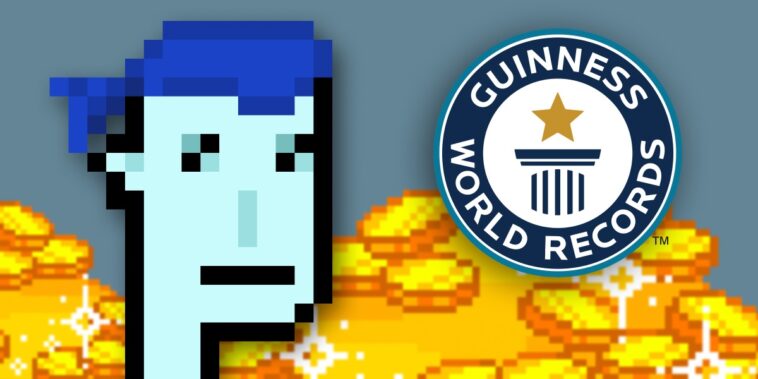 In late October, the Guinness Book of World Records featured CryptoPunk #5822 in its “most expensive NFT collectible” category. The addition was part of a new section in the world record book called “CryptoMania.” That section shares some interesting records involving Web3, including cryptocurrency and NFTs.

CryptoPunk #5822 sold on February 12th, 2022, for 8,000 ETH (around $23.7 million) to Chain CEO Deepak Thapiyal. The sale marked the high point for the collection during the latest bull run, which had seen CryptoPunks routinely sell for millions of dollars. #5822 is one of the top CryptoPunks in rarity score, being just one of nine Alien Punks.

The sale of #5822 took place before the wider fall in the NFT and cryptocurrency markets. Now, the floor price for a single CryptoPunk is 66.8 ETH or around $103,000. However, floor priced Punks are obviously in a different category than Thapiyal’s Alien Punk, which Rarity Sniper ranks as the 17th-most rare in the entire collection.

Astute NFT observers will note that Thapiyal’s Punk isn’t the most expensive NFT ever. In fact, it pales in comparison to Beeple’s Everydays, which sold for $69 million in February of 2021. It turns out that the record keepers disqualified Everydays, choosing only to rank “limited-edition sets of artwork built around pre-rendered templates.”

Other Web3 records Guinness included in its CryptoMania section include the cryptocurrency with the largest market cap (Bitcoin) and the first country to make cryptocurrency legal tender (El Salvador). It wouldn’t surprise if the organization adds more Web3 records in the future, considering the growth potential of the industry.

CryptoPunks Sell for Millions This Year

CryptoPunks, a collection Larva Labs created in 2017 and gave away for free, has become synonymous with the 10,000-profile pic NFT collection. It reached legendary status in 2021, with sales routinely in the hundreds of thousands of dollars for single NFTs. That continued through the first part of 2022. Here are three such stories.

Second, there is CryptoPunk #7756. Seven months ago, this rare Zombie Punk sold for 1,050 ETH or $3.2 million. The Zombie Punks are one the rarest subcategories in the collection, and as such, collectors are willing to pay a premium for them.

Third and finally, there is CryptoPunk #2681. 10 months ago, this rare Zombie Punk sold for 900 ETH or around $3.1 million. The purchaser was an NFT concierge service called MoonPay, which often buys NFTs on behalf of celebrities.

CryptoPunk #5822 appearing in the Guinness Book of World Records shows more mainstream publications are becoming interested in the crypto phenomenon. Here at Rarity Sniper, we’ll keep our ears to the ground for further developments in the story.