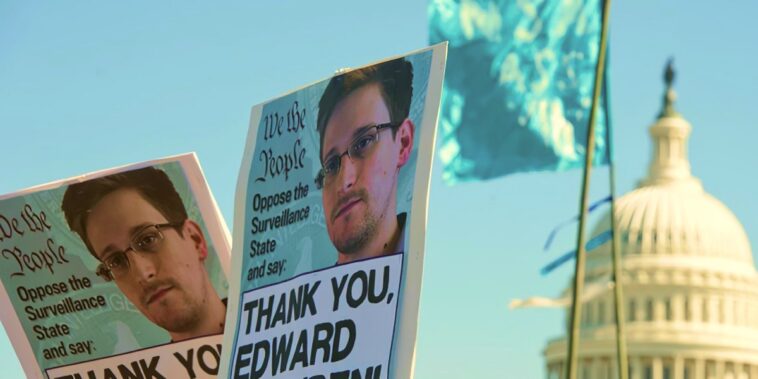 In a collaboration between political activists, Edward Snowden and Daniel Ellsberg are auctioning off a 1/1 non-fungible token (NFT) based on Ellsberg’s release of The Pentagon Papers in 1971. The auction will take place during the first episode of PleasrHouse, a new show that aims to combine comedy, entertainment, documentary features, and Web3.

PleasrDAO, a decentralized autonomous organization formed in tribute of Web3 artist Emily Yang (also known as pplpleasr), created PleasrHouse with the intent to disrupt the staid current live auction format. The Pentagon Papers NFT will mint on the Ethereum blockchain, and the auction will take place at 3pm EST on Thursday, January 12th.

This isn’t PleasrDAO’s and Snowden’s first meeting. The two initially formed a relationship when the DAO bought Snowden’s “Stay Free” NFT in early 2021 for $5.4 million worth of ETH. Proceeds of that sale went to the Freedom of the Press Foundation, which reportedly used the money to cover more than one year’s worth of operating expenses.

Like that NFT sale, the proceeds from the Pentagon Papers NFT will go to charity as well — the Freedom of the Press Foundation (again) and the Daniel Ellsberg Initiative for Peace and Democracy. Snowden chose the former, and Ellsberg picked the latter. PleasrDAO has a history of raising money for charitable causes, having created Ukraine DAO, which raised millions to support Ukraine’s fight against Russia.

The formal title of the Pentagon Papers NFT comes from a quote Ellsberg shared with media, shortly after the activist surrendered himself to authorities on the steps of a Boston courthouse. When the media asked him about the upcoming consequences of his actions, he told, “Wouldn’t you go to prison to end this war?” The title of the NFT is, aptly, that quote.

Edward Snowden has made appearances on crypto Twitter recently, with some speculating that the decentralized and censor-resistant nature of the tech has enamored the whistleblower. But he’s not the only celebrity attracted to Web3. In fact, in the past month, a few celebrities have braved the crypto winter to launch NFT collections. Here are three stories about them, all coming in December.

First, Scottie Pippen launched his NFT collection, and it sold out in a record-breaking 77 seconds. Dubbed SR33, the collection came with metaverse-ready sneakers and mystery boxes. There were also several IRL perks, such as the chance to win a pair of game-worn Pippen shoes.

Next, ex-president Donald Trump dropped a surprise NFT collection, resulting in an upsurge of users on the Polygon blockchain. Some observers panned the art of the NFTs, some of which still had watermarks, but there’s no doubt the former president caused a stir in Web3.

The collaboration between Edward Snowden and Daniel Ellsberg could be good for the NFT space, especially if it helps fund political freedom organizations. Here at Rarity Sniper, we’ll check in to see how the auction goes and report back.