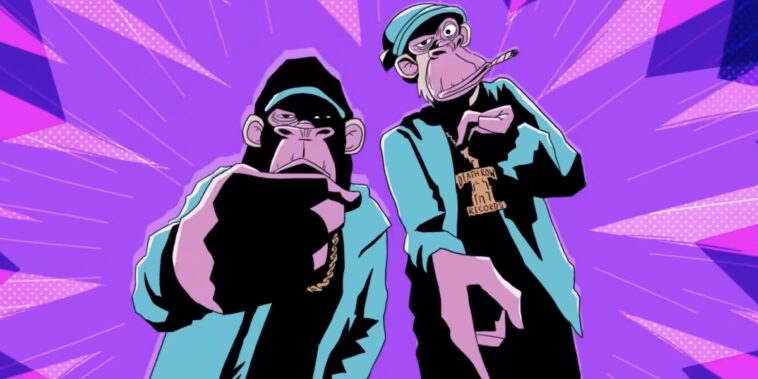 Eminem and Snoop Dogg have a long list of legendary performances. From sold-out concerts to Super Bowl Half Times, the two rappers have delivered live shows time and time again. But even for two storied rappers that hail back to the hey-days of the 1990s, this Sunday’s VMA performance may prove to be a little unusual.

According to reports, Eminem and Snoop will perform their hit single “From The D 2 The LBC” at the awards show Sunday night. It is a song with metaverse roots, inspired by Yuga Labs’ “Otherside” metaverse. The lyrics include tributes to each’s hometown (Detroit and Long Beach, California), along with copious references to general themes often seen in rap music.

So, what are the metaverse tie-ins? First, Eminem and Snoop Dogg are two high-profile members of the Bored Ape Yacht Club, Yuga’s premier non-fungible token collection. The two debuted the song at ApeFest during NFT.NYC 2022 to a rollicking crowd. And the two — though Snoop Dogg admittedly more so — have been involved in Web3.

Eminem and Snoop Dogg might prove prognosticators true by using their Bored Apes in the VMA show, although most had predicted this would take place during the Super Bowl Half Time show last year. It certainly would be interesting to see two high-profile rappers “represent” their Apes in such a prominent way, especially during a crypto-wide bear market.

This is the first time the two will appear on the same stage together at the VMAs since 1999 when they performed with Dr. Dre. In fact, neither has performed at that show in over 10 years — Eminem in 2010 with Rihanna and Snoop Dogg in 2005 when he paid tribute to Notorious B.I.G. with Diddy.

Eminem and Snoop Dogg Deep into the NFT Space

Although both men are known as rappers to most laid-folk, Eminem and Snoop Dogg have gained credibility within the NFT space for taking part, both at ApeFest and behind the scenes. Here are three stories about the two men Rarity Sniper has covered, starting with Eminem.

On December 30th, 2021, Eminem bought Bored Ape #9055 for around $450,000. #9055 is a white-fur Ape with a gold jacket, gold chain, and gray cap. In his other NFT ventures, Eminem sold a collection of animated Stans on Nifty Gateway and has invested in Makersplace.

But, while Eminem has had his own business dealings in Web3, Snoop Dogg, perhaps, has been the more active of the two. From releasing his own NFT collection on the popular metaverse The Sandbox to purchasing his own Bored Ape, Snoop continues to make headlines nearly every month in this space.

His most recent venture is a Bored Ape-themed pastry shop titled “Dr. Bombay’s Sweet Exploration.” The LA-based shop will use Snoop Dogg’s Bored Ape, nicknamed “Dr. Bombay,” as the mascot. Snoop Dogg’s partner, Food Fighters Universe, said it will release a set of related NFTs that may include in-store perks.

Eminem and Snoop Dogg performing an Otherside Metaverse-inspired song is a good sign for the NFT space, which has fallen on hard times. Perhaps the two rappers, in their first performance at the VMAs in years, can revive the old WAGMI spirit.