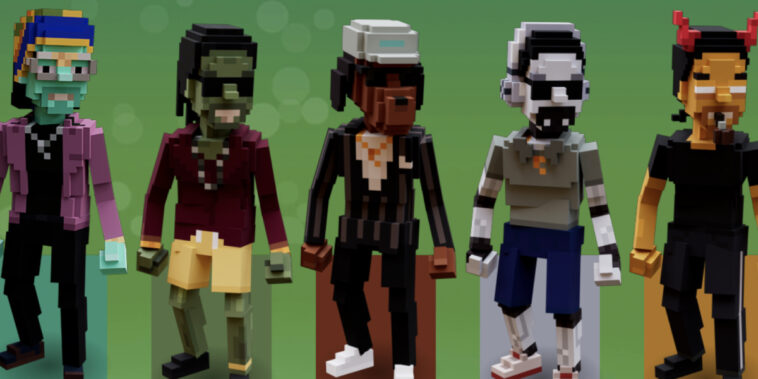 Snoop just let the dogs out — “The Doggies” NFTs, that is.

After The Sandbox let these Doggies “off the leash,” they almost immediately sold out. Anyone lucky enough to snag a Doggie NFT had to pay 150 SAND tokens, which was about $450 at the time of sale.

The 10,000 Doggies NFTs are voxel characters similar to Larva Labs’ Meebits collection — but these NFTs have more of Snoop’s swagger, of course. NFT owners could use their Doggie to explore, play, and attend concerts in The Sandbox once Alpha Season 2 begins. According to The Sandbox’s official website, Alpha Season 2 should start on May 1st, 2022.

Although every Doggie has a unique set of traits, there are seven categories these NFTs could fall into. Humans are the most common group with about 63 percent of the total Doggie supply. The rarest Doggie NFTs are in the “Golden” category, representing just 1 percent of the entire collection.

From the least to the most common, the other Doggie categories are as follows:

Snoop Dogg approved all of the 150 possible traits used in his NFT collection. He also designed ten special Doggies NFTs that pay homage to his long career. These exclusive avatars are split into three subcategories: Classic, Dope, and Signature.

The Doggies NFTs are the latest addition to Snoop Dogg’s grand metaverse ambitions. Indeed, Snoop Dogg has been hard at work developing his “Snoopverse” in The Sandbox.

Most notably, Snoop Dogg is recreating his palace-like Cali home in a plot of land within The Sandbox. The virtual land surrounding the “Doggfather’s” in-game mansion has become incredibly hot online real estate. Fans have spent well over $450,000 on LAND NFTs near Snoop Dogg’s virtual residence.

Snoop Dogg says he’s keen to connect with fans using new technologies like NFTs and the metaverse. In addition to his Doggies NFTs, the Cali-born rapper has released exclusive “Party Passes” to grant players access to special events or in-game tours. There are also many “Doggfather” NFTs such as cars, artwork, and pets within the Snoopverse ecosystem.

On top of his Sandbox endeavors, Snoop Dogg announced he’s transforming the iconic Death Row Records into the world’s first NFT label. Plus, Snoop Dogg released his B.O.D.R. album as an NFT on Gala Games.

It’s also believed Snoop Dogg spent about $17 million on some of the hottest NFT collections, including the Bored Ape Yacht Club. In September of 2021, Snoop Dogg announced he made most of these purchases under the Italian name “Cozomo de’ Medici.”