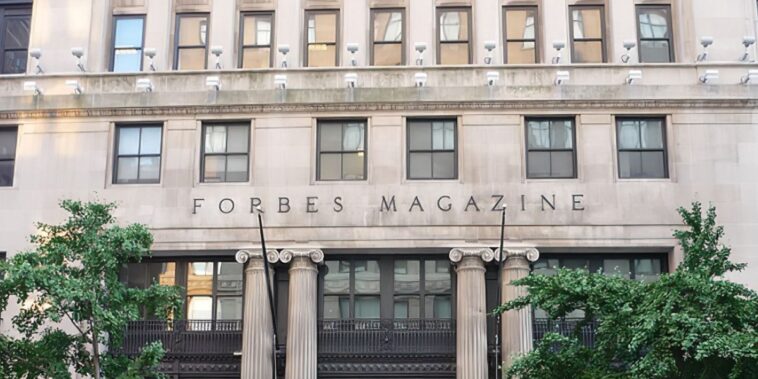 Forbes, a mainstream business magazine, has furthered its venture into Web3 by hosting an event in The Sandbox metaverse on November 10th. The event was open to members who had subscriptions with Forbes and featured games, quests, a virtual yacht, and event wearables that doubled as tickets.

Vadim Supitskiy, Forbes’ Chief Technology Officer, said the event was to engage with users “everywhere they are.” According to Suptiskiy, Forbes is always looking to connect with its members, whether in Web2 or Web3, and provide them areas to convene, make new connections, and have fun.

Members at the Forbes event had a chance to explore the publication’s metaverse. It included a non-fungible token gallery and a display of Forbes’ virtual NFT Billionaires collection. That collection involves a set of fictious billionaires who have their net worth tied to the New York Stock Exchange. The NFTs in that collection are dynamic and update periodically.

To create The Forbes metaverse experience, the magazine partnered with Polygonal Mind, a creative development studio that has built metaverse experiences in The Sandbox and Decentraland. In the past, it has worked with games like Beat Saber, Crypto Avatars, Morphite, and more.

The Sandbox has been one of the most active metaverses in the crypto bear market, creating partnerships with brands such as Playboy and individuals like Paris Hilton. The format of The Sandbox is a game where users can buy and trade items and real estate, as well as create experiences for others to enjoy.

As stated above, The Sandbox has been active during this crypto winter, more so than perhaps any other metaverse. Its partnership with Forbes is just the latest in a string that has seen major companies enter the space. Here are three stories we covered this year involving The Sandbox.

First, there is Paris Hilton’s Halloween party. In late October of 2022, the “Queen of Crypto” hosted a Halloween bash in the burgeoning metaverse called “Cryptoween.” Fans were able to enter the party with digital avatars, complete quests, and participate in raffles.

Second, there is the debut of Gucci Land. Two weeks ago, the luxury brand finally unveiled its metaverse experience, creating an activation that will last between October 27th and November 9th. The activation includes contests, games, non-fungible tokens, and more.

Third and finally, there is The Sandbox’s metaverse wedding. In September of 2022, the metaverse partnered with 1-Group and Smobler Studios to hold the first metaverse wedding, a 70s disco-themed affair. It took place on September 17th with the groom Clarence Chan and bride Joanne Tham sharing vows.

Forbes’ activation in The Sandbox shows the magazine is still bullish on Web3, despite the crypto bear market. And if other publications think it was successful, they might follow suit with their own.