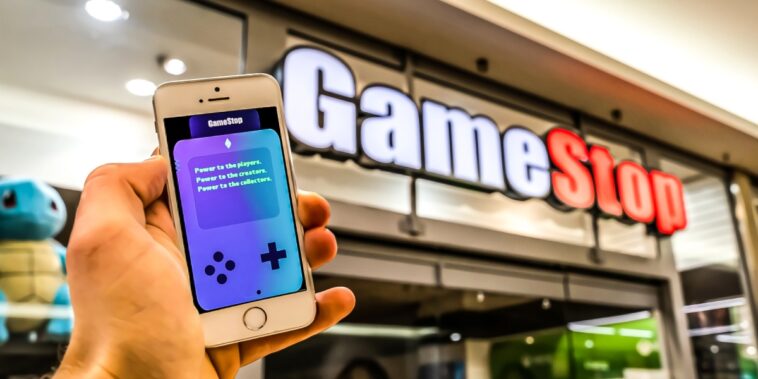 GameStop just announced it has partnered with Immutable Games Studio to bring NFT trading cards to its blockchain-based game “Gods Unchained.” The non-fungible token cards will be rolled out later this month as an exclusive perk for GameStop’s loyalty program members.

The move marks the Texas-based video game and gaming merchandise retailer’s latest push to rebrand itself in Web3 and the metaverse. In July, GameStop launched its own NFT marketplace, and in September it partnered with crypto exchange FTX and pledged to make game-related NFTs and Web3 a main focus of its business.

Gods Unchained is a strategy-oriented game built on the Ethereum blockchain. It was created by Chris Clay, the previous director of the digital iteration of “Magic: The Gathering,” and players of Gods Unchained can buy, sell, and trade in-game assets in the form of NFTs.

With the new NFT trading cards from Immutable Games Studio, players will be able to build out their ultimate deck in a digital game centered around strategy and competition. According to Clay, gamers will also be able to acquire physical cards to create their dream decks in real life.

The new NFT cards fit nicely into GameStop’s Web3 ecosystem, as the company pivots into the digital world under the leadership of new CEO Matt Furlong. GameStop and Gods Unchained fans can purchase $GODS — the game’s native currency, hold digital assets in their GameStop wallet, and trade NFT cards on the GameStop NFT marketplace.

According to the press release, redemption codes for the NFT trading cards will be sent out on September 27th to GameStop PowerUp Pro Members. Currently, the cards are only available to members.

NFT Trading Cards Are On the Rise

GameStop has been bullish on Web3, blockchain, and NFT technology for some time now, and its latest move to create NFT trading cards to expand its digital ecosystem is more evidence of this. But GameStop isn’t the first company to push NFT trading cards.

In fact, NFT trading cards have been a hit ever since the National Basketball Association and Dapper Labs created Top Shot on the Flow blockchain in 2020. Since then, we’ve covered several stories about NFT collectible trading cards for gaming and sports. Here are two top stories from the realm of sports.

Next, Topps Company Inc. launched an MLB All-Star Game NFT collection and other Web3 initiatives for the 2022 MLB All-Star Week in July. The NFTs featured players that were voted for in the first round of fan voting and range in rarity from Uncommon to Legendary.

Because NFTs enable traditional trading and collectible cards to be digitalized and stored securely on the blockchain, companies and leagues are using them to connect to fans in new ways. We’ll have to wait to see if the rollout of the NFT trading cards from GameStop later this month is a success. But for players of Gods Unchained and GameStop Pro members, a free NFT trading card with in-game utility will likely be appreciated.