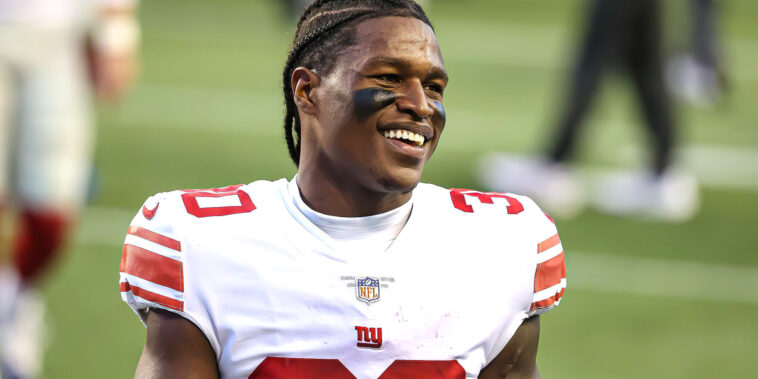 The Giants are having a good start to the 2022-2023 NFL Season. Sitting in third in its division with a record of four wins and one loss, the team has wins over Carolina Panthers and Chicago Bears. In other words, it’s a good time to be a Giant. Nothing encapsulates this merry atmosphere more than a viral video clip that surfaced after the Giant’s win over the Green Bay Packers.

Warning: It’s NSFW. In it, cornerback Darnay Holmes is standing on the sidelines with his pants partially down. A trainer, his hand out of sight, “treats” Holmes for a presumed leg injury. Given the angle and the motion of the trainer’s hand, viewers speculated about what injury the trainer could be “treating.”

Or, as Barstool Sports wrote in its viral Tweet, “Giants OnlyFans sale for the 4-1 start. 50% off through midnight.”

Holmes took it in stride, posting a Tweet with a laughing emoji on Tuesday. He wrote, “Y’all need to chill, the tent wasn’t available. Everyone’s having so much fun with the vid so I decided to team up with @momentoNFT and turn it into an nft. Gonna give away some signed balls and do some live streams too.”

MomentoNFT is a platform that allows social media users to turn their content into NFTs. These “social NFTs” go to reward fans of the social media creator through rewards, perks, and experiences. The platform allows NFTs to sell through auctions or for a fixed price.

There’s no telling when Holmes will turn the video into an NFT. But there’s no doubt the jokes will keep on coming.

While many industries have bet big on Web3, few have done so as big as the sports industry. Because NFTs and Web3 tech allow organizations to connect with supporters in a new way, sports leagues have been jumping in. The NFL has been no different. Here are three stories involving the NFL and Web3.

First, there is the NFL’s ticket stub NFT program. Three months ago, the NFL expanded the program to include 101 games in the 2022-2023 season, including all games in Week 1. The ticket stubs serve as digital memorabilia to remind people of the experience they had attending a game.

Second, there is the NFL blockchain game “NFL Rivals.” Five months ago, the NFL announced a partnership with Mythical Games to produce the Web3 game, which will see players create and manage an NFL team.

Third and finally, there is the NFL’s metaverse job opening. Eight months ago, the NFL created a job opening for a “senior manager of content partnerships” that had decidedly Web3 responsibilities in its description. There is no word when the NFL completed the hire.

Darnay Holmes turning his viral moment into an NFT is apropos of the industry: A moment caught fire, and now the main subject wants to immortalize it on the blockchain. Here at Rarity Sniper, we’ll pay close attention for further developments in the story.