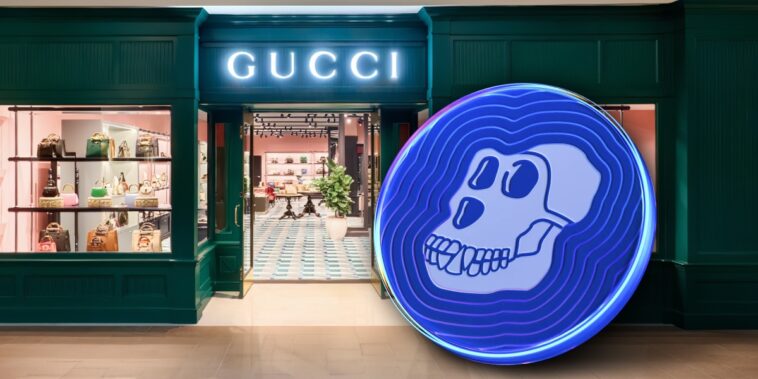 In a Tweet on August 2nd, luxury brand Gucci announced it would start accepting ApeCoin at U.S. stores, becoming the first major company to do so. ApeCoin is the official cryptocurrency of Yuga Labs and one that has benefited holders of Bored Ape Yacht Club and Mutant Ape Yacht Club NFTs tremendously. Gucci wrote in its Tweet:

“Now accepting @ApeCoin payments via @BitPay, select Gucci boutiques in the USA expand the range of cryptocurrencies available for in-store purchases, yet another step in the House’s exploration of Web3.”

NFT Twitter reacted to the news well, posting pictures of themselves lining up at Gucci stores or proclaiming (already) to be among the first customers to pay in $APE. Some speculated that this adoption of cryptocurrency would be slow at first among mainstream companies, then all at once, like the tipping of an iceberg.

The ApeCoin Twitter account also celebrated the news with multiple emojis, stating that it was “excited” that Gucci was the first major brand to allow in-store purchases with $APE. The price of the cryptocurrency trended upward after the announcement, in line with a broad trend of recovery in the crypto markets.

Gucci’s acceptance of ApeCoin as a form of payment is not the company’s first foray into Web3 or even cryptocurrency. Three months ago, Rarity Sniper reported that Gucci had begun accepting 10 cryptocurrencies as payment in its stores, including Bitcoin, Ether, Litecoin, Dogecoin, and Shiba Inu. Here are three other stories of the luxury brand diving into Web3.

A month ago, Gucci dropped its latest NFT collection titled “The Next 100 Years of Gucci.” The NFT collection was a collaboration with NFT marketplace SuperRare and celebrated Gucci’s heritage while looking towards its future.

Gucci’s acceptance of ApeCoin as a form of payment is a big deal for the NFT community and represents another step in the luxury brand’s exploration of Web3. Here at Rarity Sniper, we’ll be watching for further developments in the story.