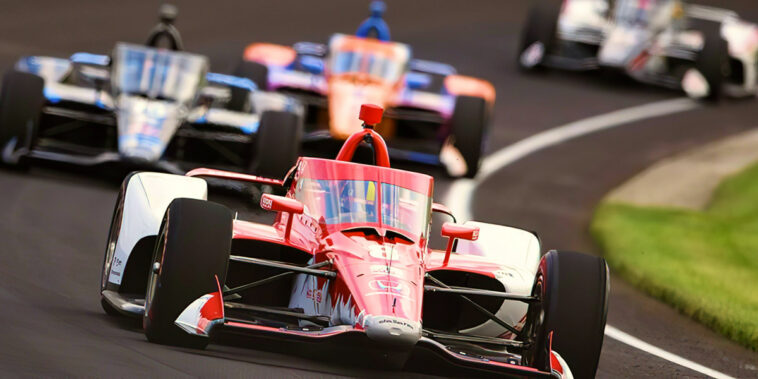 In partnership with Tom Brady’s Autograph.io, the Indianapolis Motor Speedway released three NFT collections for the 2022 Indy 500 race. Two of these NFT drops are available for purchase, while the third is only open to people who hold an IRL Indy 500 ticket.

According to a recent press release, anyone with a seat at the 2022 Indy 500 could have applied for a “Commemorative Race Day NFT” on Autograph.io starting on May 19th. The IMS also says these NFTs will come with unique features like “additional content,” but it has yet to reveal more specific details.

On May 23rd, the IMS launched its “Mystery Driver Container” NFT collection, which features digital cards with one of the 33 racers in the 2022 Indy 500. There are 33 editions of each racer in the “Mystery Driver” set, which equals 1,089 total NFTs.

Anyone who holds a “Mystery Driver” NFT when the Indy 500 starts will get a physical souvenir from the big race. The IMS says it will ship a piece of carbon fiber from the associated driver in each holder’s NFT after the Indy 500 airs on May 29th.

Anyone interested in buying an Indy 500 “Mystery Driver” or Team Penske NFT can find them on the DraftKings NFT Marketplace. After purchasing one of these NFTs on DraftKings, collectors can view them on the Autograph platform.

Throughout 2022, digital collectibles have become increasingly popular at mainstream sporting events. However, since this technology is so new, many leagues seem to be “dipping their toes” into NFTs by offering digital commemorative tickets.

Besides the Indy 500, NASCAR offered free collectible ticket NFTs to people at the 2022 Daytona 500 on the WAX blockchain. The Texas Motor Speedway also announced it would airdrop NFT tickets to attendees with a FLOW wallet at the NASCAR All-Star Weekend.

Outside the racing world, the NFL gave out collectible NFT tickets featuring the Rams and Bengals to everyone who visited Super Bowl LVI. The NHL’s LA Kings also dropped free commemorative NFT tickets to a few lucky hockey fans via Crypto.com’s NFT Market.

While all of the above examples have no real-world utility, it’s not so far-fetched to imagine pro leagues offering game day tickets or season passes as NFTs. Indeed, PwC recently said NFT tickets could soon generate millions in the global sports sector.