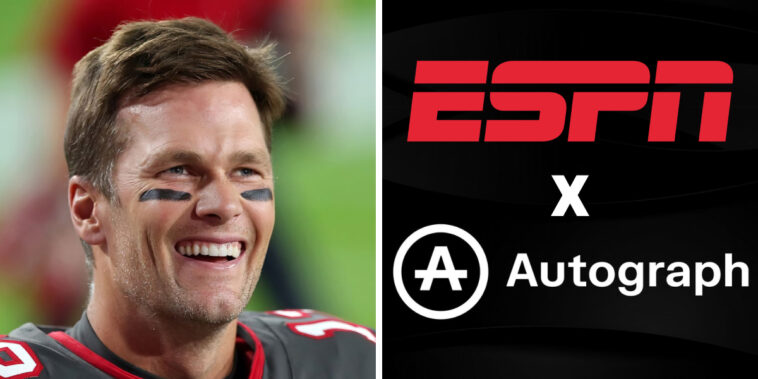 To celebrate their new partnership — and to promote the TV series “Man in the Arena: Tom Brady” — ESPN launched its first collection of NFTs featuring the legendary NFL quarterback. On April 6th, ESPN dropped Tom Brady NFTs on the DraftKings NFT Marketplace. Each of these NFTs features a magazine cover with Tom Brady, and they were in one of the following tiers:

A unique feature associated with “Man in the Arena” NFTs is that each has a hand-written “virtual autograph” from Tom Brady. NFT holders could view their Tom Brady NFTs on Autograph.io.

Shortly after launching on DraftKings, ESPN’s first collection of Tom Brady NFTs sold out. However, there will be another opportunity for Tom Brady fans to snag ESPN-sponsored NFTs. The company says they will reveal the second series of Tom Brady NFTs called “Back in the Arena” when the 10th episode of “Man in the Arena: Tom Brady” airs on Hulu and Disney+.

Although the 10-part docuseries “Man in the Arena” premiered last year, it was only available for viewers who had an ESPN+ subscription. ESPN is using its new NFTs to highlight the limited release of “Man in the Arena: Tom Brady” on other Disney-owned streaming apps.

While there are no specifics on other NFT projects, both Autograph and ESPN say they are interested in developing more pro sports NFT collections in the future.

Tom Brady will always be known for his historic football career, but he’s also one of the top crypto-friendly pro athletes. Most notably, Brady and his wife Gisele Bündchen promote the FTX cryptocurrency exchange. Brady has also frequently changed his Twitter profile pic to include Bitcoin “laser eyes.”

As mentioned above, Brady is the co-founder of the Autograph NFT marketplace. In addition to Autograph’s partnership with ESPN, this platform has NFTs with sports celebrities like Tiger Woods, Tony Hawk, and Wayne Gretzky. The Autograph platform also recently closed a deal with Lionsgate Entertainment.

More recently, there are rumors that Tom Brady may be involved in the Bored Ape Yacht Club. According to The Bored Ape Gazette, Brady may have bought Bored Ape #3667 for 133 ETH (or about $460,000) on April 5th.

Some believe Brady bought this NFT because he responded to a tweet from the Trippies NFT project. Trippies welcomed “@TomBrady” to the Trippies club, implying Brady used one of Trippies’ psychedelic NFTs to transform Bored Ape #3667. Although Brady responded to Trippies with the joke, “I didn’t inhale 🤣🤣,” there’s no official news Brady is a BAYC member.