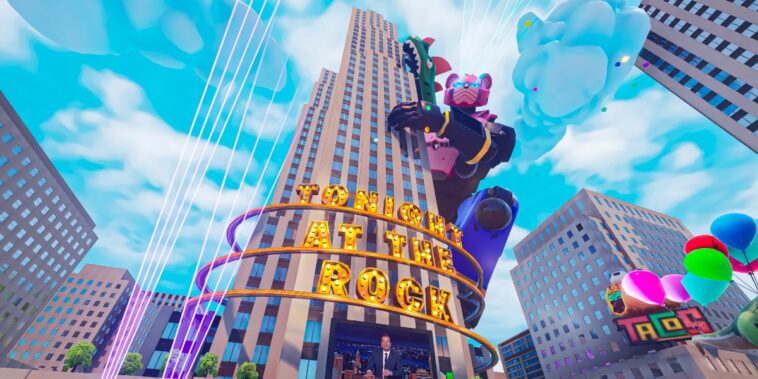 Samsung is teaming up again with “The Tonight Show Starring Jimmy Fallon” to release the show’s first interactive gaming experience in the metaverse. “Tonight at the Rock Powered by Samsung Galaxy” is set to launch tonight, Wednesday 21st in the wildly popular virtual world and gaming universe Fortnite.

Users of the new game will be able to visit virtual replications of famous sites in New York City like Times Square and Central Park, as well as The Tonight Show’s locations Rockefeller Center and Studio B. Besides the metaverse experience, there are also games and mini-games — some of which were inspired by Fallon’s favorites like Giant Pong, Cabbie Crash Course, and Race Up the Rock.

Players can also use in-game power ups featuring Samsung’s newest devices like the Galaxy Z Fold4, Galaxy Buds, Galaxy Watch5, and the Galaxy Tab S8 Ultra. The game is free, and users only need to download Fortnite on Android or a PC — or access it on consoles like PlayStation, XBOX, and Nintendo Switch. There are single and multi-player options.

Fallon said he approached Samsung with the idea of creating an experience in Fortnite and was thrilled when they approved. Through the immersive metaverse experience, Fallon hoped fans from around the world will be able to come together to have fun.

Though Samsung and The Tonight Show have collaborated on several projects in the past, this is their first interactive gaming and metaverse experience. Last night on the show, Fallon heralded the game’s graphics and attention to detail. And tonight, fans can tune in at 11:35 ET for an in-show integration mirroring one of the available games.

Samsung Is Bullish on Web3 & the Metaverse

The metaverse-style game created by Samsung and Jimmy Fallon for Fortnite is a big deal. But for people following the South Korean electronics brand this year, it should come as no surprise. At Rarity Sniper, we’ve reported several stories about Samsung investing in Web3 gaming and metaverse experiences. Here are the top three.

About six months ago, Samsung announced its latest high-end smart TVs would let users browse, buy, and display non-fungible tokens (NFTs). The NFTs must be purchased from Samsung’s partner for the project, NFT marketplace Nifty Gateway.

Next, about four months ago, news surfaced that Samsung was discussing with its employees how to create its own metaverse. During March’s shareholders meeting, the main topics were metaverse products and solutions.

Lastly, this summer Samsung partnered with “Break the Rules” singer Charli XCX for a virtual concert in the Roblox metaverse. Users had the chance to participate in challenges, solve quests, and play min-games for a chance to join the singer on stage during the show.

Samsung is clearly bullish on Web3 and the metaverse, and its actions this year, including its latest metaverse gaming experience on Fortnite are proof of that. We’ll have to be patient to see if “Tonight at the Rock” catches on in popularity. But for fans of “The Tonight Show Starring Jimmy Fallon” and Fortnite, tonight could be a lot of fun.