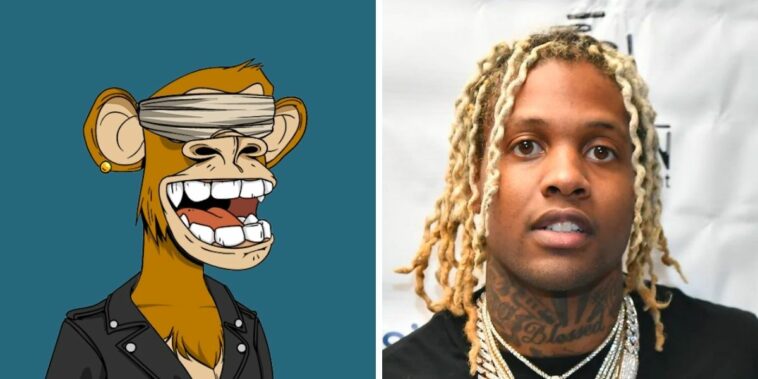 Chicago rapper Lil Durk joined a large number of celebrities entering the Bored Ape Yacht Club (BAYC), purchasing Ape #9977 via MoonPay for 79 ETH or $252,000. He quickly changed his Twitter profile pic to the Ape, tweeting an introduction to the NFT Twitter community:

The Bored Ape Yacht Club, more than other NFT collections, has been a target for celebrity buys in recent months. In addition to Lil Durk, Meek Mill, Eminem, Jimmy Fallon, DJ Khaled, and Lil Baby have purchased Apes in the collection, often changing their profile pics on Twitter to the Apes.

These celebrity purchases (and the impending $APE token drop) have likely contributed to the increased value of the Apes, which some are comparing to luxury products like Rolexes. As NFT Twitter BAYC fans like to share, “Rolex makes a million watches per year. There are only 10,000 Bored Apes.”

Super Bowl Sunday may also raise the profile of BAYC even further, as rumors state that Snoop Dogg and Eminem are working on incorporating their Bored Apes into their halftime show performance.

The collection has provided some of the top utility in the NFT landscape this past year with the founders throwing BAYC and the lesser-known Mutant Ape Yacht Club (MAYC) holders parties at NFT NYC — first on an actual yacht and then second by a well-known DJ.

In addition to the soon-to-be-released $APE token, the founders are developing a video game that pits the BAYC members against MAYC members, as well as a possible P2E video game later in the year.

Aside from the utility of the BAYC collection, many outside observers view the BAYC (and MAYC) as a kind of exclusive club where holders can network, receive business opportunities, and form relationships. This community is part of BAYC’s draw and what has made it so appealing to so many people.