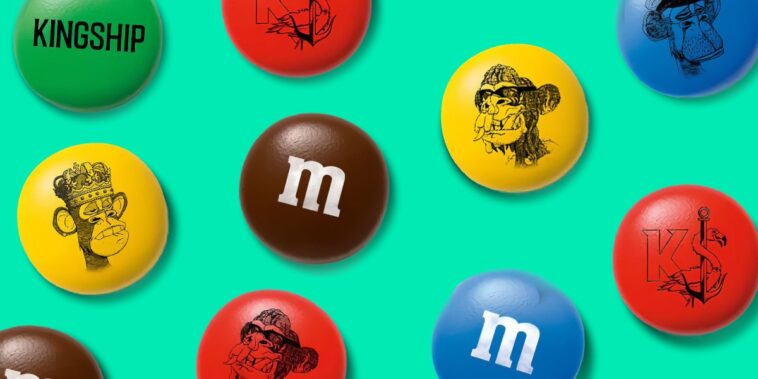 In honor of the group’s craving for the iconic candies in their dressing room before metaverse and digital concerts, the KINGSHIP’S likeness will appear on three exclusive M&M candy boxes.

As per the group’s “rider” — the items the virtual band requests when it plays a venue — the exclusive M&M’s will include the iconic chocolate candies in all six colors. The four members will also appear on the individual M&M chocolates.

KINGSHIP is a virtual rock ‘n’ roll group consisting of a rare Mutant Ape and three Bored Ape NFTs. The members include Captain (vocals, bass) KING (lead vocals), Hud (vocals, guitar, keys), and Arnell (drums, producer, beats). The group was created by Web3 company 10:22PM and has a myriad of Grammy-Award-winning songwriters, producers, artists, and a famous animator behind its projects.

To market the product, M&Ms rolled out a short, animated video of the four apes leaving their island on a speed boat to discover a magical dock with a stack of giant M&Ms — in all colors of course.

There appear to be around 10,100 exclusive M&M products available for fans of KINGSHIP and candy. More information about the collaboration with M&M’s and details about the band’s story, such as its eclectic wants is available at kingship.io.

Although the overall NFT market has been down in recent months, it hasn’t stopped blue-chip NFT collections from innovating. Perhaps no other project has been as busy — both its founders and holders — in the NFT space as Yuga Labs and the Bored Ape Yacht Club (BAYC). Here are some of the most interesting stories we’ve covered about BAYC in recent months.

Continuing with music, the legendary producer Timbaland launched a music video in the metaverse featuring two Bored Ape Yacht Club NFTs. The video, which was titled “Congo Has Meaning” and took place in a virtual version of NYC, was itself an NFT that fans could purchase.

Next, Snoop Dogg announced he would be partnering with Food Fighters Universe to leverage the IP rights of his favorite Bored Ape for a new LA-based dessert shop. The Bored Ape-themed pastry restaurant will be called “Dr. Bombay’s Sweet Exploration,” in honor of Snoop’s Ape, whom he’s named “Dr. Bombay.”

Lastly, Major League Soccer (MLS) reported it had signed a Bored Ape to its roster to become the first digital athlete to receive a professional sports contract. Although details have been vague, the deal will likely give the IP rights of Bored Ape #6045 — aka “Striker” — to the league to market it as it sees fit.

Last year, the news was full of celebrities and musicians buying NFTs from the popular BAYC collection, and this year we’ve seen more collaborations and holders leveraging Bored Apes to release creative projects and businesses of their own.

Time will tell if KINGSHIP’s limited M&Ms will be a hit among fans. But as the virtual group builds its story and releases new music, a partnership with an iconic candy maker like Mars Inc. could be a step forward.