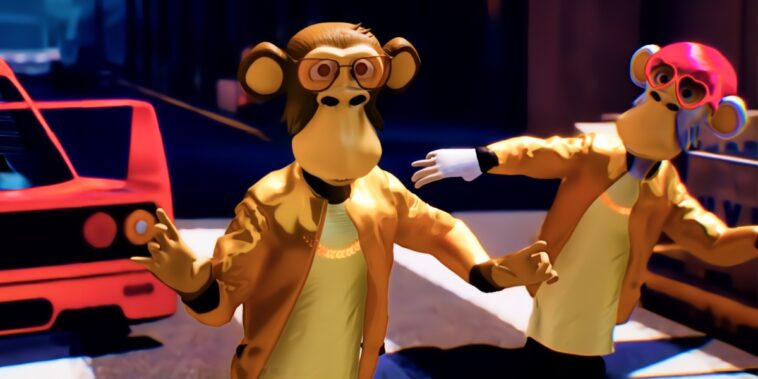 The legendary music producer Timbaland has launched a music video in the metaverse featuring two Bored Ape Yacht Club (BAYC) NFTs. And guess what? The video itself is a non-fungible token that fans can purchase.

With the launch, Timbaland leveraged the Intellectual Property rights of his Bored Ape #590 — or as he calls the forlorn Ape with a gold jacket and gold chain — “Congo.” The video is titled “Congo Has a Meaning” and features animated renditions of “Congo” and “Pinky” (Bored Ape 7661) dancing and rapping in a metaverse version of NYC over a bass-heavy, feel-good track. The video was produced by Timbaland’s protégé Zayd Portillo and captured using Unreal Engine.

One fun twist is that in Timbaland’s metaverse version of the Big Apple, all of the adverts and billboards are for Web3 companies, and if fans look closely they can see some that are rather funny: One says “Breaking News: What is Mutant Ape Theory?” and another shows an angry Bill Gates speaking discouragingly about crypto and NFTs.

The music video, which can be viewed on Glass.xyz, debuted at the NFT NYC conference in June in front of an excited crowd. There are only 100 editions of the NFT video available for the price of .4 ETH apiece — around $435 at the time of writing.

Musicians are Fundamental to BAYC

Although Timbaland has only been a member of the Bored Ape Yacht Club since September 2021, he’s been busy in the Web3 space. Timbaland is the co-founder of Ape-In productions, a music label that was created by an assortment of Bored Ape Yacht Club members to promote community members. The group is a self-described “artist-owned entertainment company.”

And Timbaland isn’t the only superstar musician who’s been making moves in Web3 through the BAYC. Perhaps the most prominent individual mover of all in Web3 is Snoop Dogg. The legendary rapper and entrepreneur is a member of the BAYC and even announced a Bored Ape Pastry Shop. He has also dropped multiple NFT collections and a music video in the metaverse, bought land in the metaverse, and pledged to turn the iconic hip label Death Row into an NFT music label.

Beyond Timbaland and Snoop, the BAYC boasts several rappers and musicians as members. Some of the most notable include Eminem, Steve Aoki, Post Malone, Meek Mill, Lil Baby, The Chainsmokers, and Paris Hilton.

For whatever reason, musicians and entertainers have gravitated towards the Bored Ape Yacht Club and created an entertainment-rich community. We’ll have to wait and see how Timbaland and his metaverse-persona “Congo” continue to influence Web3 music and the NFT space. But we think BAYC members like Timbaland, who have creative visions and the means to pull them off, could help bring Yuga Labs and the BAYC NFT collection to a whole other level.