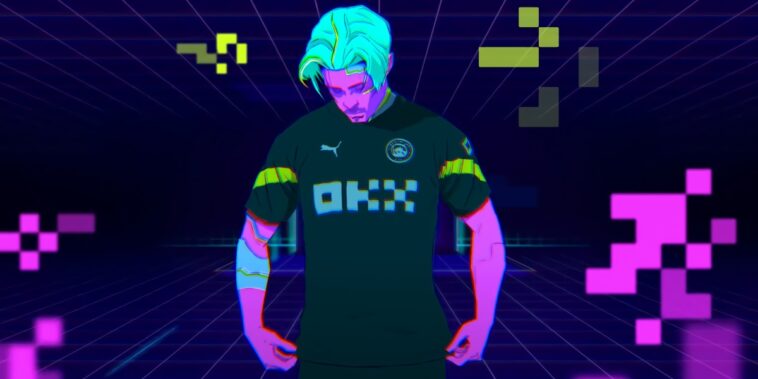 The English soccer team Manchester City recently announced it has partnered with the crypto exchange OKX as its official training kit partner for the upcoming 2022/2023 season. As part of the deal, the OKX logo will be featured on training gear for the men’s and women’s clubs.

OKX and Man City first inked a deal back in March, shortly after the club cut relations with 3Key technologies, its previous Web3 partner. OKX is a popular Seychelles-based cryptocurrency and derivates exchange.

Along with the announcement, OKX commissioned a series of murals featuring Manchester United players Erling Haaland, Jack Grealish, João Cancelo, and John Stones in different locations in Manchester. The works were created by the Global Street Art Agency and renowned street artist Akse P19 and will have QR codes fans can scan for a chance to win season tickets in the OKX Hospitality Box.

Also, last week, the soccer club announced that OKX would be the presenting partner for the team’s trophy tour in 2022, which will bring the Premier League to Spain, France, UAE, Korea, Mexico, Norway, and South Africa. Games will also be broadcasted on Roblox, a gaming metaverse, and come with perks and immersive experiences.

With the partnership, OKX hopes to enhance the fan experience, provide educational initiatives related to Web3 and crypto, and create programs to empower the Manchester community.

Manchester City diving deeper into Web3 should come as no surprise to folks who’ve been following Web3 news. Only six months ago, we reported that Man City had set out to build the first soccer stadium in the metaverse to let fans around the world tune in virtually. And Manchester City isn’t the only soccer club investing in nascent technologies.

At Rarity Sniper, we’ve been covering soccer in Web3 all year and things only seem to be heating up. Here are a few recent headlines about Web3 and soccer:

We’ll have to wait and see what comes of the Manchester City and OKX partnership. But since both organizations have stellar reputations and a shared vision to innovate in the Web3 space, the partnership looks like it could be mutually beneficial.