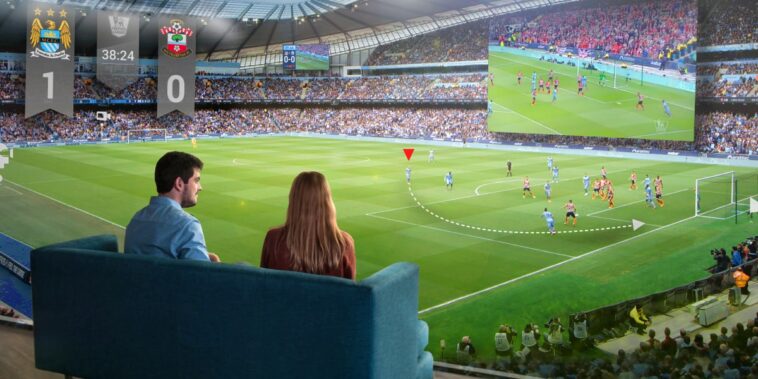 To make viewing games more accessible, Manchester City inked a three-year deal with Sony to build the first virtual soccer stadium in the metaverse. The agreement with Sony is to employ its Hawk-Eye technology to make watching games hyperrealistic, even if you are watching from the comfort of your home.

Nuria Tarre, the club’s group Chief Marketing Officer, said the metaverse provides options for the club and fans that off-chain viewing of games does not. These include watching the game from different angles and filling the stadium beyond “capacity.”

The goal for Manchester City, the reigning champions of the English Premier League, is not just to build any soccer stadium. Instead, it will recreate the Etihad Stadium, where the club plays home games. Sony representatives have already toured the Etihad Stadium to get a feel for its size and begin creating the virtual version.

The building of a virtual stadium may affect broadcast rights as well. Some publications suggest that teams broadcasting their games in the metaverse may sell broadcast rights directly to the viewer rather than a television agency or media company.

No timetable has been set for when Man City and Sony will complete the stadium. Because the metaverse is still relatively new, it may take time to build the virtual stadium, then have fans adopt this channel as a means to watch games.

Man City Could Benefit from Other Aspects of Web 3.0

While Manchester City is focused on building a virtual stadium, it may benefit from other aspects of Web 3.0. Many companies, such as Gucci and Miller Lite, have bought metaverse land with the intent of building experiences. But others are going beyond the “experiences” and selling digital goods directly to customers in the form of non-fungible tokens (NFTs).

NFTs, unique one-of-a-kind assets stored on a digital ledger called a blockchain, have several benefits that soccer clubs may take advantage of in the future. They include:

Given that the adoption of the metaverse will likely continue, soccer clubs like Man City may create virtual goods rather than just experiences. These could include virtual jerseys to wear, NFTs with off-chain utility like redeeming an item at the IRL stadium, or membership tokens to chat with players in a virtual environment.