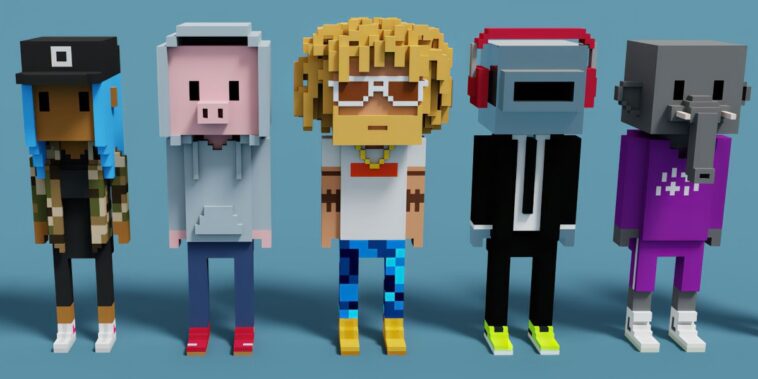 Even during a bear market, NFT collections continue to set milestones. The Meebits NFT collection is the latest, surpassing $500 million in total sales. This landmark makes Meebits the 13th-most purchased collection, around $140 million more than the large collection of The Sandbox NFTs. Here are some other noteworthy Meebits statistics:

Meebits is a 20,000 NFT Voxel collection, voxel referring to 3D creations where the artist creates figures from blocks. Voxels are popular in metaverses and form the basis for characters in The Sandbox, one of the most popular virtual shared worlds. Larva Labs, the company that produced the CryptoPunks collections, initially released Meebits. In a stunning move, Yuga Labs later bought both the CryptoPunks and Meebits collections from the New York City-based company.

The Meebits collection, while having fallen on hard times despite the milestone, is widely credited with launching the 3D NFT avatar movement. Before then, NFT avatar projects had primarily been in 2D, with most of the inspiration coming from the CryptoPunks collection. The Meebits project was initially popular as well, fighting with the Bored Ape Yacht Club for second supremacy in NFT land during the summer of 2021.

Whether it returns to popularity remains to be seen and depends mainly on Yuga Labs and what the young company will do with the collection. Yuga has a penchant for marketing projects well, and if they can add utility to the Meebits project, it might return to form, though it is uncertain what that would look like. As of this writing, its floor price is 4.3 ETH or around $5,400.

But Yuga wouldn’t stop there. Here are two more moves the company made that galvanized NFT country.

First, Yuga Labs launched ApeCoin, a decentralized cryptocurrency, for holders of Bored Ape and Mutant Ape Yacht Club holders. The airdrop netted those holders a payday in the upper five figures and provided them liquidity without having to sell their NFTs. Although some might have seen ApeCoin as a simple reward for BAYC and MAYC, Yuga had other plans, vowing to use it to build an ecosystem.

Second, Yuga Labs held their mint for a metaverse called Otherside. The company promised NFT degens that this virtual world would not be gated and open to all. The mint was so successful that it crashed Etherscan and resulted in hundreds of millions in gas fees as people competed for Otherside NFTs. Although it is a bear market, Yuga is still making moves, starting load testing for the Otherside metaverse in the past week.

While Meebits has struggled lately in sales, its passing of $500 million in sales is a nice bit of news for those in the NFT community who have seen only red numbers. And with Yuga taking the reigns, it could emerge again as a top collection.