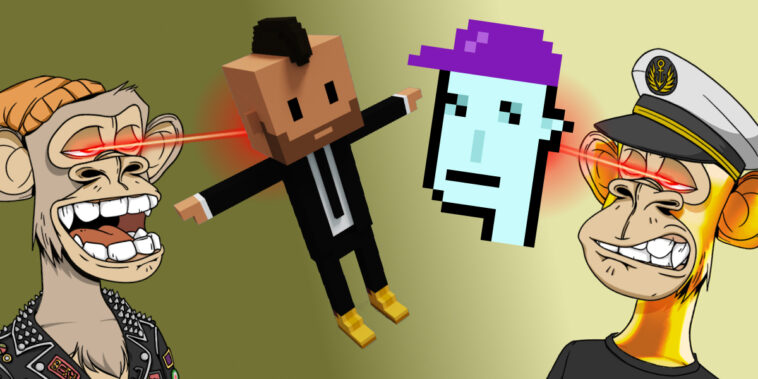 Yuga Labs, the creators of Bored Ape Yacht Club (BAYC), announced today that it has acquired the IP of CryptoPunks and Meebits NFT collections from Larva Labs. That means Yuga Labs owns the brands, art copyrights, and other IP rights to both collections.

CryptoPunks was created in 2017, and is considered the OG of profile picture NFT collections. Yuga Labs has always admired the project’s founders, Matt Hall and John Watkinson. And like all NFT collections and NFT studios that came after CryptoPunks, Yuga Labs was able to learn from and expand upon elements that the Punks first put into the NFT world.

Now it’s honored to own a collection that is such a vital part of NFT history, and Larva Labs appears to be pleased with the deal as well. Though no details about pricing have been published yet.

Hall and Watkinson released a statement praising Yuga Labs as “innovators of the modern profile picture project.” They expressed they had faith that Yuga Labs would be the ideal stewards of CryptoPunks and Meebits into the future.

The two founders of CryptoPunks will continue creating Web3 projects at Larva Labs, and are not expected to join Yuga Labs.

The first move from Yuga Labs is to grant CryptoPunks and Meebits holders the same commercial rights that BAYC and Mutant Ape Yacht Club owners have. It is currently working with their legal to team draft the terms and conditions for both NFT collections.

The idea is to align CryptoPunks and Meebits even further with the decentralized ethos of Web3, and with the help of community developers and creators to continue building the overall brand of the collections.

Yuga Labs says it has no plans to shape the collections into the ‘club’ model which it developed for BAYC. It believes BAYC will remain the center of the world it is building, while CryptoPunks is a historic collection it hopes to usher into the future.

Yuga Labs also says it is excited to see what the CryptoPunks and Meebits communities will do with their IP rights as they continue to build a community-owned brand that will extend far beyond NFTs.

The current CryptoPunks floor price on OpenSea is around 74 ETH and 6.5 ETH for Meebits. Though with the exciting news, perhaps the most important acquisition of NFT collections to date, those prices will likely be skyrocketing in the hours and days to come.

We’ll be keeping our eye out to see what else Yuga Labs plans to do with CryptoPunks and Meebits. But for now, it’s time to sit back and watch these vibrant NFT communities react to the news.