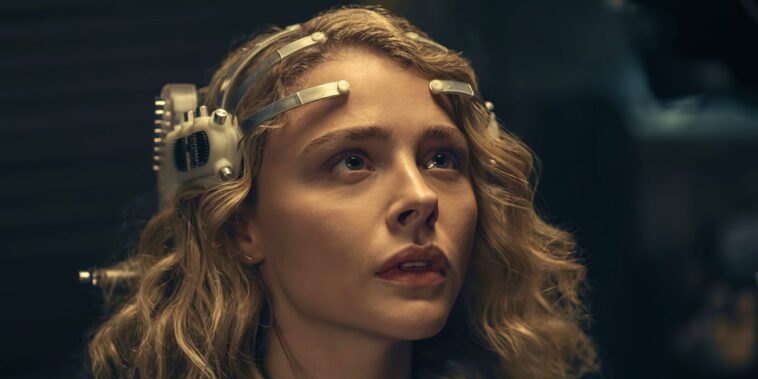 The latest series from Amazon TV’s “The Peripheral” is set in a futuristic, immersive metaverse. The series is based on the 2014 novel by William Gibson of the same name. It premieres on October 21st on Prime Video and stars Chloe Grace Moretz and Jack Reynor.

Although it was the writer Neal Stephenson who first coined the term metaverse in his 1992 sci-fi novel Snow Crash, the prolific novelist Gibson is no stranger to coining terms. He is credited for first using the word “cyberspace” in his short story “Burning Chrome” in 1982 and then in his debut novel “Neuromancer” in 1984.

Gibson’s novel “The Peripheral” discusses new ideas around virtual reality and time-travel, and similar to “Snow Crash,” the present in the book is bleak and dystopian while the metaverse is a compelling but dangerous virtual world characters escape to.

The setting for “The Peripheral” is a small town in the Blue Ridge Mountains in 2032. Two siblings, protagonist Flynne Fisher (Mortetz) and her brother Burton (Reynor), are taking care of their mother and earning extra money by playing simulations (Sims), when Burton is offered a large sum of money to try out a new Sim. Flynne ends up playing the game and finds herself immersed an all-too-real high-stakes metaverse adventure.

The series is produced by Amazon Studios and Warner Bros. Television, in association with Kilter Films. Other executive producers include Athena Wickham (Westworld) and Steven Hoban (In the Tall Grass), among others. You can see the trailer here.

The major release from Amazon TV implies that mainstream society is becoming more interested in the metaverse. At Rarity Sniper, we’ve also seen several media companies, brands, and directors using Web3 technology to release TV and film projects. Here are some of our top stories.

About five months ago, the iconic American director Spike Lee announced he was releasing a series of NFTs based on his appearance as Mars Blackmon in his 1986 film “She’s Gotta Have it.” The NFT collection is being released in collaboration with the decentralized filmmaking platform The Visible Project.

Next, the film and entertainment company Lionsgate is bringing its blockbuster movie “Hellboy” to The Sandbox metaverse. The movie will appear in a new area of the popular decentralized metaverse called “Action City.”

Lastly, Fox Corporation reported it would invest $100 million into a new lineup of NFT-based shows. To begin the new division, Fox tapped the co-creator of “Rick and Morty” Dan Harmon to create a new NFT-based showed called “Krapopolis.”

The world will have to wait a few more weeks for the premiere of “The Peripheral,” but it appears people’s appetite for the metaverse and virtual reality-themed entertainment is growing. We’ll be tuning in October 21st to see if the show lives up to the hype.