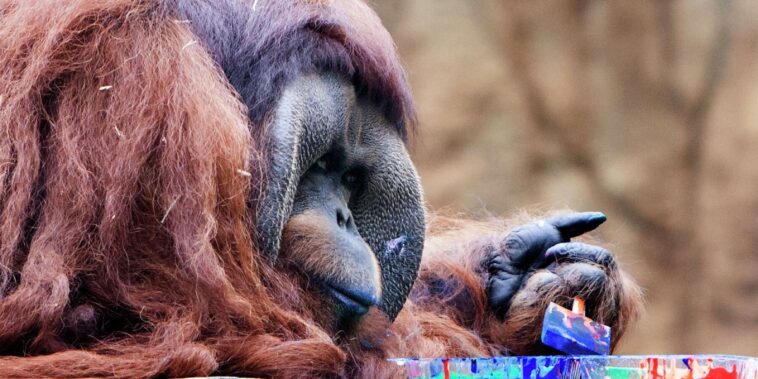 We write about non-fungible tokens (NFTs) every day, and this is a first even for us. The Oklahoma City Zoo has teamed up with the Oklahoma Zoological Society for a new animal enrichment program that resulted in the resident orangutan, Elok, creating a collection of NFTs.

And the orangutan-designed NFTs are for a good cause — to raise money to support the conservation of wild orangutans and their habitat. While there are a lot of ape and monkey-themed NFTs, these are the first NFTs in the world to be created by an orangutan.

To make the art, Elok used a 2-foot digital brush on a 3X4-foot screen. As the brush was moved, a motion device projected the art on the screen. Elok participated in the program voluntarily, which resulted in the 21-year-old Sumatran orangutan becoming the world’s first known animal digital artist.

The Zoo is hopeful that the project — which combines conservation, charity, and animal enrichment and brings it to the NFT space — will be received with global excitement. All funds from the sale of Elok’s art will be used for conserving orangutans and other endangered species.

The NFTs will be available via an international auction on Friday, August 19th.

NFTs Are Being Used to Raise Money for Good Causes

While we’ve never seen an NFT artwork from an orangutan before, the Oklahoma City Zoo is far from the only entity using NFT technology to raise money for important causes. At Rarity Sniper, we’ve written about dozens of NFT projects aimed at generating funds for charities and good causes. Here are some of the most interesting headlines.

About four months ago, Pampers partnered with LL Cool J’s Rock the Bells to drop an NFT collection to raise money for the Black Mamas Matter Alliance. Besides the NFT collection, which launched on Curio, Pampers will also be the sponsors of Black Maternal Health Week.

Next, there is Nestlé. The company sold a pair of NFTs months ago to celebrate the introduction of its TRIX line into the Middle East. Proceeds from the sale of the NFTs went to the Emirates Red Crescent charity, making it the first blockchain initiative focused on a charitable cause to launch in the Middle East.

And during the summer, rapper Ja Rule dropped an NFT collection called “Black is Beautiful,” where 10 percent of profits from initial sales will be given to Historically Black Colleges and Universities (HSBCU). The colleges that received money included Morehouse College, Hampton University, Spelman College, Morgan State, and Jackson State.

Time will tell how the world reacts to an orangutan creating NFT art. But two things are certain: The project from the Oklahoma City Zoo is original, and the cause to protect orangutans is a good one.