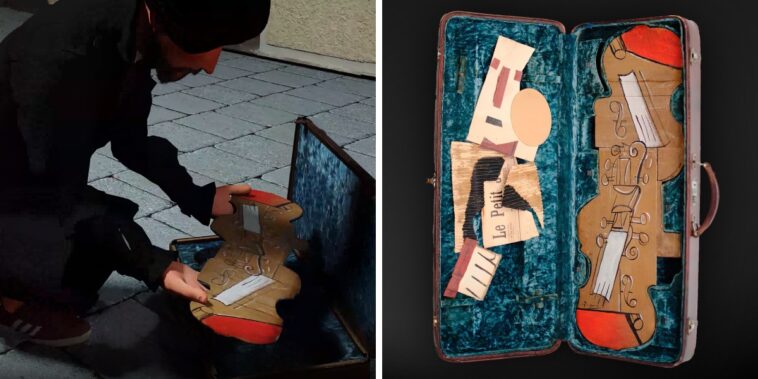 WISeKey International Holdings Ltd. recently announced that its WISe.ART 2.1 NFT marketplace will create an NFT token for a major cubist painting by Pablo Picasso called “The Magic Violin.” The NFT will contain a physical package including the original artwork, a holographic version of the NFT, and a live broadcast of the NFT in two different museums simultaneously.

Picasso’s “Magic Violin” is a collage made from newspaper clippings, colored paper, and music scores. The NFT and art design were done by Pedro Sandoval, who in his short film, tells the story of the theft of two violins from the famous French painter Henri Rousseau. Picasso, who greatly admired the artist, replaced the violins with an image of a violin and placed them inside the empty case. The case with the cut-out violin is now the property of a Spanish collector, Marco Salvadores Ruiz’s grandson, who bought it at auction.

The art piece has been exhibited in the following locations:

Pedro José Sandoval is an artist from Venezuela best known for his abstract neo-expressionist art. His work is in many private collections around the world.

WISe.ART is an online platform that connects artists, galleries, collectors, and other stakeholders of the art market. The platform offers a unique solution to the problem of authenticity and ownership verification of digital assets.

The new design by WISe.Art allows for the creation of a digital asset that can be linked to a physical object, and provides proof of ownership, provenience, and a set of contracts defining future use and monetization.

The Traditional Art World Is Warming Up to NFTs

In 2021, the huge sales of non-fungible tokens sent ripples throughout the art world. Many found it incompressible that digital art could generate price tags like $69.3 million (the price for Beeple’s Everydays: The First 5000 Days) or the $11.7 million paid for a rare CryptoPunk at Sotheby’s auction house in June of the same year.

But since the initial shock, some traditional art museums and collectors have embraced NFTs and are using the nascent technology to reach new, younger audiences.

Earlier in the year, we reported that four Italian art museums, including the Uffizi Galleries in Florence, had signed onto a project to sell editioned non-fungible tokens (NFTs) of priceless artworks. The debut project was called “Eternalizing Art History” and it featured six replicas of famous Italian masterpieces by artists like Raphael and Leonardo da Vinci.

And a few months ago, The Vatican made Web3 news when it announced that it was working with Sensorium, a metaverse company, to bring some of its artwork into Web3. The project will allow people around the world to view The Vatican’s priceless collection.

Time will tell what sort of effect a real-life Pablo Picasso work being combined with an NFT by WISe.Art will have on the art world, but it’s becoming more clear that NFTs and traditional art can work in tandem together.