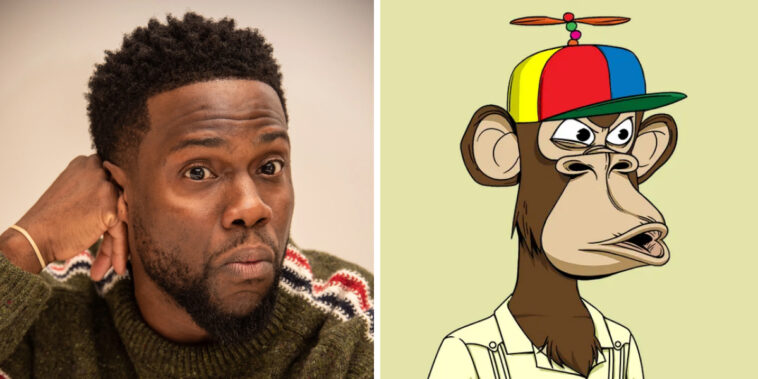 Adding to the list of stars joining the Bored Ape Yacht Club, comedian and actor Kevin Hart aped in last weekend, purchasing Ape #9258 for 79.5 ETH ($200,000) via MoonPay. The concierge asset purchaser posted a teaser of the purchase on Sunday afternoon:

Hart joins a long list of celebrities, musicians, and athletes who have joined the Club in the past few months. The news of Hart’s purchase comes on the heels of Serena Williams’ newfound Ape and Neymar’s purchase of Apes #6633 and #5269.

Hart’s #9258 is ranked 5,858th in rarity. It has the traits “angry eyes,” “phoneme ooo” mouth, and “guayabera shirt.” Its rarest trait is its “spinner hat,” which occurs just 181 times throughout the entire collection.

With the number of celebrities who have entered the Club in recent methods, the BAYC NFTs are being referred to now as luxury items, akin to a Rolex. They are both status symbols and memberships to an exclusive club. And the demand for these NFTs continues to grow as the floor price (the lowest price you can buy into a collection) is approaching 90 ETH.

The Club is particularly popular amongst rappers with Meek Mill, Lil Baby, Lil Durk, Eminem, and Snoop Dogg members of the BAYC. Rumor has it that Eminem and Snoop Dogg are planning to use their Apes in the Super Bowl Halftime Show in February, which would put even more eyes on the collection.

Part of the appeal for the BAYC has always been the community, but the team behind the collection has worked to bring utility to Ape holders as well. Just since launch, the team has put on large parties for holders at NFT NYC, released an Apes vs. Mutants video game, and has solidified plans to release the $APE token in Q1 of 2022.

The $APE token, according to one source plans to be “generous,” and some speculate that the airdrop could make Bored Ape holders instant millionaires even with the ability to hold onto their Bored Ape NFTs.

The fun won’t end with Hart either. Earlier Monday, MoonPay teased another Ape they bought and will deliver to another celebrity. The company wrote: “Ape #1294 is known to enjoy ‘The Simple Life’ even though they are appearing on prime time TV ‘tonight’. Who could it be?”