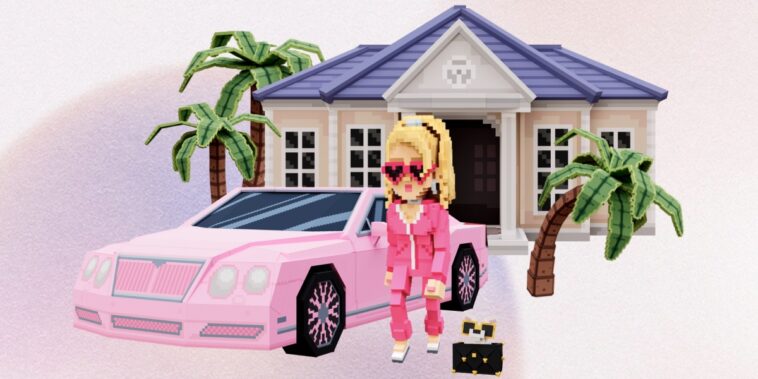 Hotel heiress and “crypto queen” Paris Hilton has partnered with The Sandbox to build a virtual mansion on the metaverse platform. The end goal is to host parties and allow fans to connect with her in an entirely new way.

Hilton said in a Medium post that she is “beyond excited” to expand her presence in Web3 to The Sandbox metaverse. Her team is dedicated to building a real-life experience for her fans.

According to the Medium post, the virtual Malibu mansion and the functionality that it offers will give Paris Hilton’s fans novel ways to connect with her and her multifaceted personality. There will be 11 Paris Hilton avatars, glamorous social events, and rooftop parties.

Rather than a completely new venture, Paris Hilton’s mansion can be seen as an extension of her Roblox presence, where she has already bought an island and created experiences for Roblox gamers. She describes her Web3 ascension as “reclaiming her power,” a process that some metaverse denizens may be able to relate to.

Hilton has gained the reputation of “crypto queen” from her early adoption of Web3 technology. She initially partnered with Animoca Brands, the majority investor of The Sandbox in 2015, and spent much of 2021 becoming ingrained in the world of non-fungible tokens.

Although many have criticized her for her lackadaisical approach to life given her position within the Hilton empire, she has proven to some Web3 enthusiasts that she is genuinely passionate about the nascent technology.

The Sandbox Makes Waves in 2022

The Sandbox, where Paris Hilton will build her virtual mansion, has made an impact in Web3 throughout 2022. It is in the running for the top decentralized metaverse spot, competing with Decentraland, and it seems every month that it has partnered with a new entity to further its Web3 presence. Here are three stories Rarity Sniper has covered involving The Sandbox and partnerships.

Three weeks ago, Rarity Sniper reported that South Korea’s No. 1 bank KEB Hana had entered The Sandbox. The goal for KEB Hana was to further its Web3 presence, and to do so, it will open a virtual branch in the metaverse and help users monetize plots of digital land.

Also three weeks ago, Playboy announced it was building a digital replica of its Playboy mansion in The Sandbox. The “MetaMansion” will likely host parties and serve as the Web3 point of access to the brand’s burgeoning amount of media material.

Finally, a month ago, Tony Hawk, the famous skateboarder, announced he was building “the largest skatepark in the metaverse” in The Sandbox. The skatepark will open on 36 plots of virtual land and will likely come with additional utility from Hawk’s NFT collection.

Paris Hilton’s entry into The Sandbox will excite her fans and certainly shows that The Sandbox, even in a bear market, is still making moves to bring more experiences to users.