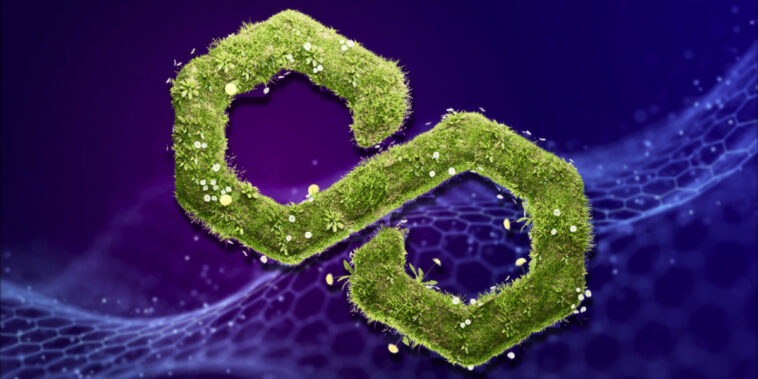 The Polygon Network, a Layer 2 scaling solution for the Ethereum blockchain, has just released its “Green Manifesto,” and the first pledge is a doozy: becoming carbon negative by the end of 2022.

The Manifesto, published last week, delves into the Polygon Network’s environmental impact. It states that the team behind Polygon will track every single transaction in 2022 and offset their energy outputs. After, Polygon will work to become the first climate-positive blockchain.

In 2021, the Polygon Network had roughly 91,000 carbon emissions. It plans to buy $400,000 worth of BCT and MC02 carbon credits to offset this carbon usage. It is also partnering with KlimaDAO, the “most high-profile proponent” and facilitator of the “on-chain carbon market.”

As part of the Green Manifesto, Polygon has pledged $20 million toward community initiatives, including ones that use technology to fight climate change. The organization will also create a “climate-offset vertical” within its ecosystem.

The team writes that this “commitment to sustainability” acknowledges Polygon’s stature within the blockchain ecosystems and that it has a responsibility to “lead by example.” Part of the leading by example will include more than just Polygon’s backyard. It aims to provide resources to ecosystem partners who want to lessen their environmental impacts.

New Web3 Technologies Could Be More Positive for Environment

The environmental impact of cryptocurrencies and non-fungible tokens has long been a source of criticism among opponents of Web3. They argue that blockchain technology causes irreparable damage to the environment, and the benefits of Web3 don’t make up for that.

However, the past couple of years has revealed a shift in the landscape. New blockchains are generally proof of stake, proof of delegated stake, or other proofs less energy-intensive than those that govern the legacy blockchains. Like AMC’s for The Walking Dead collection, many major companies are launching NFT sets on carbon-neutral blockchains.

And when it comes to Ethereum, the most used blockchain in the space, a change is coming that could reduce its energy output by 99%: The Merge or Ethereum 2.0. When it occurs, Ethereum will move from the energy-heavy proof-of-work to a minimally-intensive proof-of-stake. Gas fees should fall sometime after that, with the overall energy usage of the blockchain reduced.

Polygon hasn’t revealed much of its plans outside of buying the carbon offsets, but its Green Manifesto can only be seen as a positive step in the direction of Web3. And if other blockchains follow suit, Web3 could take a dramatic step from being environmentally harmful to positive.