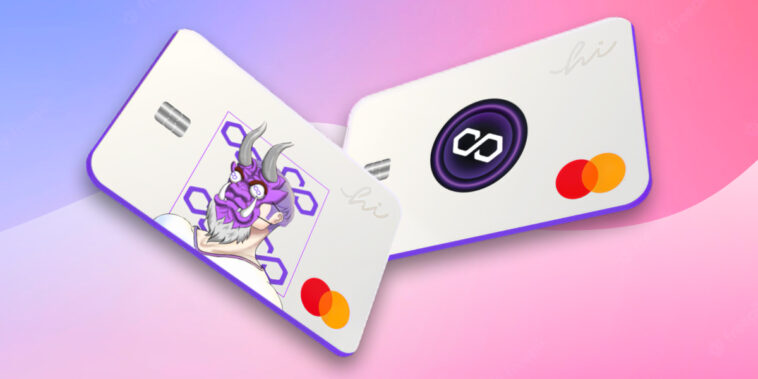 Polygon, a blockchain that has seen tremendous growth this year, has made another move: partnering with neobank ‘hi’ and Mastercard to launch NFT debit cards. With the cards, users will be able to place their favorite non-fungible token on the front, a change from previous arrangements where users of only select NFT collections could place their NFTs on cards.

Sean Rach, co-founder of hi, said the hi team is delighted to be partnering with Polygon, an organization he called “pioneers in the space.” According to Rach, the NFTs are going to look “awesome” on the cards, and the company can’t wait to welcome the Polygon NFT holders to the hi community.

To have the ability to put their NFTs on the cards, holders must select a debit card in one of four tiers: silver, gold, platinum, or diamond. The lowest tier requires the user to stake 10,000 $HI tokens, which are hovering around the $0.022 price. Each card comes with perks, including spend rewards, an earn booster, and free lifestyle subscriptions.

With a card, users will be able to spend cryptocurrency or fiat currency at more than 90 million locations worldwide. For now, the cards are only available to citizens of 25 European countries and the United Kingdom.

If users don’t have an NFT to put on the card, they can mint a free one as well courtesy of the hi bank. In addition to putting an NFT on a debit card, users will be able to take advantage of hi’s creator program, which allows for the easy minting of an image into an NFT on the Polygon blockchain.

While most of the trading volume in the NFT space takes place still on Ethereum, Polygon has made in-roads into Ethereum’s dominance. This is especially true in the past few months, which has seen Polygon form partnerships with major companies. Here are three stories involving Polygon just in the past month.

First, on December 20th, Polygon saw an upsurge in users due to a new collection: the Trump Digital Trading Cards. Some quick stats show the action on Polygon. First, during the NFT drop on December 18th, there were over 1,000 transactions per hour on the blockchain. And in the week of December 12th, over 332,000 users traded or minted NFTs on Polygon.

Next, on December 9th, Polygon announced a partnership with Warner Music Group. Their goal: to launch an NFT music platform in January 2023. This platform, called LGND, already has its first record label signed: Spinnin’ Records, which includes major electronic musicians like David Guetta.

Lastly, 29 days ago, Magic Eden revealed that it was partnering with Polygon to bring to life its “multi-chain vision.” Another goal of the partnership is to expand the blockchain gaming space. Many top games choose Polygon as their blockchain due to the fast speeds and low gas costs.

Polygon’s partnership with neobank hi is big news for the Web3 space and shows that the blockchain and the organization behind it keeps collaborating with top companies. Here at Rarity Sniper, we’ll pay close attention for further developments in the story.