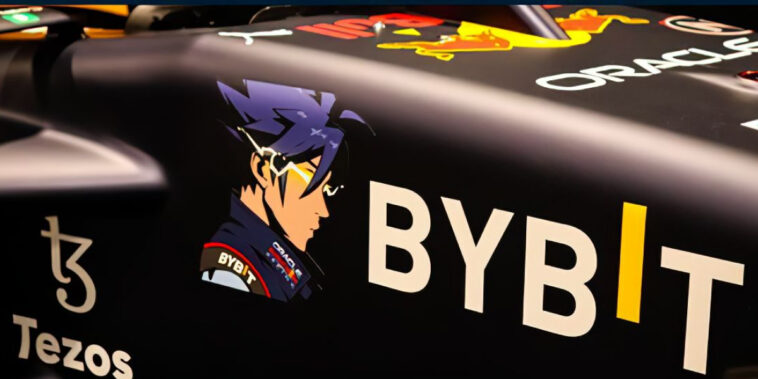 In 2022, NFT partnerships just keep on coming. In the latest news, blue-chip collection Azuki has partnered with Red Bull Racing to put Azuki #8494 on the side of two of its cars, which drivers Max and Checo will pilot for the final Formula 1 race of the season in Abu Dhabi. The move builds on the intellectual property of #8494, which currently has a 9 WETH bid on OpenSea.

Chiru Labs, Red Bull Racing, and Bybit, a cryptocurrency platform and third partner, have named #8494 “Lei the Lightning Azuki.” He is symbolic, in that he represents the meshing of virtual and physical worlds, as well as the unique partnership between the three groups. According to a press release, he is a “tenacious racer” in the Azuki universe with the ability to harness lightning to achieve high speeds.

In addition to making Formula 1 history with the partnership, Bybit will be minting “Lei the Lightning Azuki” NFTs on the Tezos blockchain. The 8,494 NFTs will be available on November 20th and there will be no cost to mint one. The writing on the Bybit website states that Lei’s story will “unfold” during the F1 2023 season, indicating that this partnership will more than a one-time deal.

When it comes to traits, #8494 is a human Azuki with blue spiky hair and a toothpick sticking out of his mouth. He wears a black T-shirt, holds a lantern, and has lightning coming out of his eyes.

Azuki is a 10,000-NFT collection that lives on the Ethereum blockchain. Zagabond, the pseudonymous founder behind other NFT projects, created Azuki in January of 2022. The collection quickly appealed to those enthralled with skater culture.

Web3 Partnerships Have Been Plentiful in 2022

Even during the cryptocurrency and NFT bear markets in 2022, Web3 partnerships have been plentiful. Companies have been apt to form strategic partnerships this year, whether to enter metaverses or the blockchain gaming industry. Here are three such stories.

First, there is the partnership between TCL Electronics and Roblox. For Halloween, the two formed a partnership that would bring the electronics giant into the metaverse. The activation included a host of TCL Electronics products, including LED televisions and Soundbars.

Second, there is the partnership between FIFA and Roblox. Ahead of the World Cup in Qatar, FIFA, the governing body of soccer, created FIFA World within the Roblox metaverse. It includes skill games, challenges for collectors, video content, and more.

Third and finally, there is the partnership between Animoca Brands and Cool Cats. In October, the two revealed they had created a “strategic partnership” to bring the NFT brand into Web3 gaming. Since then, they’ve already collaborated on a collection: a soccer themed NFT set for the World Cup.

The partnership between Chiru Labs, Red Bull Racing, and Bybit is big news, as it shows the partnerships just keep coming in 2022. Here at Rarity Sniper, we’ll keep our ears to the ground for further developments in the story.