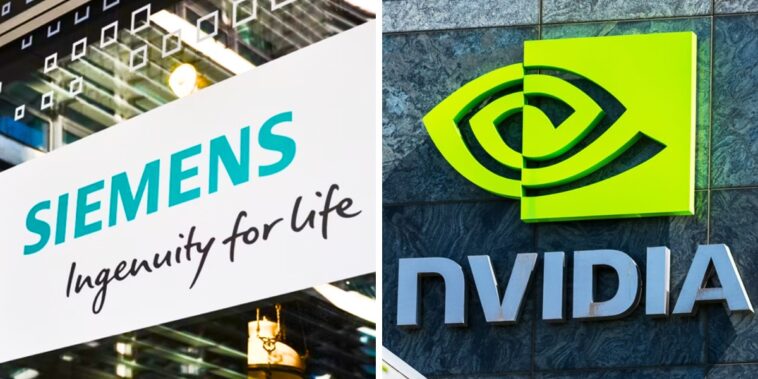 Siemens, a leader in industrial automation, and NVIDIA, a pioneer in artificial intelligence, have partnered to usher in a new era of the industrial metaverse. The first step in their partnership is to join the Siemens Xcelerator and NVIDIA Omniverse, a 3D platform, to enable various features for companies to combine digital twins and AI.

The compatibility between digital twins — a term that refers to making a digital replica of a physical object — and AI should give companies more confidence to make decisions over a product’s lifecycle. This merging will also increase productivity and process improvements centered around IoT (the Internet of Things) and analytics.

In the press release for the partnership between the two companies, the writer mentions tackling the engineering problems of the future in a visually rich and immersive environment, synonymous with the metaverse.

Roland Busch, CEO of Siemens AG, said physics-based digital twins combined with artificial intelligence present an opportunity to transform our economies and industries. The companies will do this by taking advantage of both Siemens’ and NVIDIA’s tech. This new industrial metaverse will connect hardware to software from the edge to the cloud.

Jensen Huang, the CEO of NVIDIA, said the two companies share a vision that will drive digital transformation. Connecting NVIDIA’s Omniverse to the Siemens Xcelerator will expose it to a “whole new world” of industrial automation that Siemens’ solutions are building.

2022 Has Seen Many Metaverse Developments

The metaverse, a shared social space built for virtual and augmented reality, has many positives for different sectors of society. After Mark Zuckerberg changed Facebook’s name to Meta in 2021, many companies became interested in the nascent technology. Here are some of the developments in the metaverse and related industries this year.

First, Meta itself has been busy. It has integrated non-fungible tokens into Instagram, rolled out 3D avatars for its suite of social applications, and hosted metaverse concerts in Horizon Venues. Zuckerberg is not shy about his ambition to build a widely-adopted metaverse, and it is showing.

Second, many companies have dabbled in or created experiences in virtual reality. The technology, which uses a helmet to draw images directly onto users’ eyes, has seen heavyweight companies like Fender and BMW dive in.

Third and finally, Yuga Labs, a homegrown Web3 company, is starting to build out its Otherside metaverse. In fact, load testing for that virtual world starts this week. People were so hyped about Otherside that the initial NFT mint caused Etherscan to crash.

The partnership between Siemens and NVIDIA is undoubtedly interesting and, if it works out well, could spell more innovation for a space that already moves at light speed.