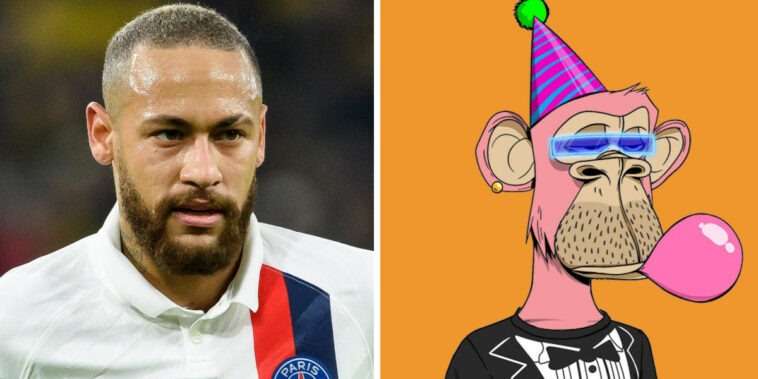 The Bored Ape Yacht Club may have its biggest celebrity yet. On Thursday,  soccer superstar Neymar de Silva Santos (Neymar) aped into the Club, purchasing Bored Apes #6633 and #5269 for a total of 350 ETH ($1.1 million). Neymar announced his entrance to the Club on NFT Twitter, tweeting:

I am an ape! #community #art #BoredApeYC pic.twitter.com/iOe3E0H2t6

Neymar is one of soccer’s biggest stars and boasts 55.6 million followers on Twitter. His two Ape purchases are no slouches either, with #6633 ranking as the #119-rarest and #5269 the #1062-rarest in the collection.

#6633 is a seven-trait Ape with a tuxedo T-shirt, gold stud earring, pink fur, and holographic eyes. Its party hat is its rarest trait, with just 1% of Apes donning the “Party Hat 2” on their heads. #5269 isn’t quite as rare but does have the coveted “Laser Eyes” trait, which less than 1% of Apes have.

Neymar’s purchase of both Apes could help the mainstreaming of non-fungible tokens, along with announcements from Meta and Twitter that add functionality to NFTs in social media settings. His popularity provides an even bigger boom to the Bored Ape Yacht Club, which has seen celebrities like Jimmy Fallon, rappers like Lil Durk and Meek Mill, and other athletes like Steph Curry join the Club.

Rumor has it as well that Eminem and Snoop Dogg may plan to use their Apes in their NFL Halftime Show performance, which would also put more eyeballs on the Yacht Club and NFTs overall.

The purchase comes in the middle of a run-up for the Club, which has seen the floor collection of NFTs rise considerably, even past the once-standard CryptoPunk collection. With the $APE token slated for release in Q1 of this year, Ape owners may have a chance to receive a lump sum worth millions in a simple airdrop.

Although the utility of the Bored Ape Yacht Club was once a major drawing point, it appears more and more that BAYC’s status as an exclusive club where NFT holders can network, form connections, and create business opportunities is reigning supreme. The Bored Ape, sometimes flexed on social media, is often seen as a luxury product, akin to a Rolex.

Since Neymar did not discuss his motivations for joining the Club, it’s unclear what BAYC feature appealed enough for him to purchase his two Apes, though it may have been a combination of all.