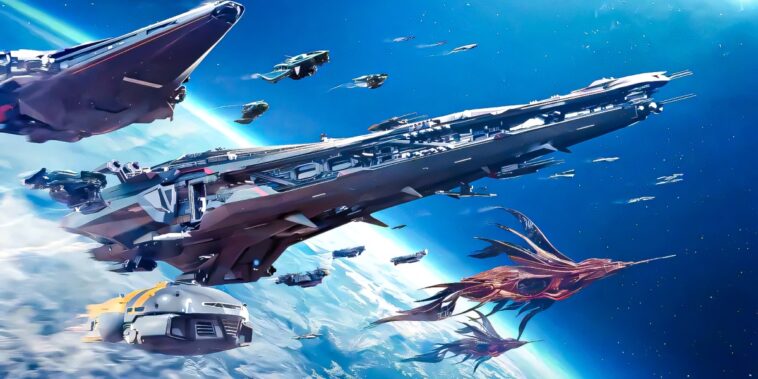 The pre-alpha demo is being called “Star Atlas: Showroom,” and it highlights the Unreal Engine 5 technology that powers the game. Owners of Star Atlas NFTs can now explore a virtual reality 3D environment and get a chance to see the vehicles and ships they invested in up close.

The Unreal Engine 5 gameplay experience was announced yesterday, September 29th, at the studio’s community-focused 426LIVE event. ATMTA also announced that it was launching a toolkit that lets other developers and studios connect Unreal Engine 5-based games to the Solana blockchain.

The Star Atlas Universe is an ambitious futuristic metaverse project built on the fast and eco-friendly blockchain Solana. It dubs itself as a strategy-based MMORG with play-to-earn (P2E) mechanics and player ownership. The game will let players pilot ships to engage in trade and battle and comes with a triple-A game design and cinema-quality real-time environments powered by Unreal Engine 5 graphics.

It was also announced that Showroom demo will soon expand to include multiplayer capability, chat features, and the chance for NFT holders to take their NFT ships out for a spin in the metaverse. Currently the Showroom is only open to people who own Star Atlas NFTs, although ATMTA said that some select non-NFT holders will be given an access code to a non-NFT ship for virtual exploration.

The Epic Games Store is one of the most popular sites for PC games, and unlike its rival Steam, the platform permits NFT and blockchain-based games. Though Star Atlas looks like one of the most complex and ambitious Web3 games on the horizon, it could take years before the game comes to full fruition.

Blockchain-Based Gaming & Investments on the Rise

There’s no doubt that ATMTA wants to be a pioneer in Web3 gaming by developing the most compelling play-to-earn game on the Solana blockchain. But for that to happen, it’s going to have to beat out a lot of competition. Even as crypto winter persists, several video game developers and Web3 companies are investing in P2E games that run on blockchain technology, crypto, and NFTs.

At Rarity Sniper, we cover Web3 gaming stories nearly every day. Listed below are some of our top headlines related to Web3 gaming:

Interest in Web3 from gamers, developers, and investors should come as no surprise. Blockchain and NFT technology give players ownership over in-game items like weapons and skins, which they can buy and sell to earn crypto. This dynamic is not possible in traditional “walled garden” games where everything is controlled and owned by the video game developer.

For now, Star Atlas is still the promise of a potentially popular Solana-based game in a future that could see the gaming industry dominated by Web3 games. But the roll out of its Showroom demo to NFT holders and the toolkit launched for developers shows the company is developing its road map patiently and staying committed to its community — two good signs for any Web3 platform.