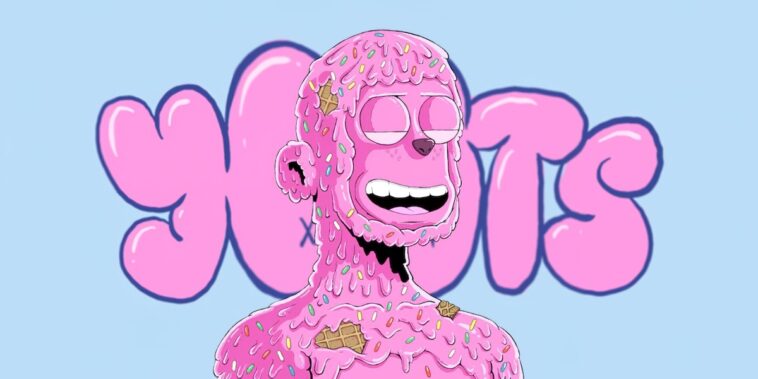 After months of suspense, the highly-anticipated y00ts art reveal has finally arrived.

At 8:43 AM UTC on Friday, November 4th, the official y00ts Twitter account posted a surprise tweet announcing the reveal. Rather than reveal the entire 15,000 NFT collection at once, y00ts creator Dust Labs is revealing one y00t every three minutes until all are unveiled.

The generative art features sheep avatars are in the popular PFP format. Hardcoded in the metadata are unique traits which give each sheep its own flare. Many are decorated in colorful designer glasses. Others sport headwear, such as crowns and bandanas. Some wear robes or athletic apparel. However, no two trait combinations are the same.

Upon discovering the reveal, shocked NFT enthusiasts around the world chimed in on Twitter. y00tlist members (applicants accepted to participate in the mint) updated their profile photos and reintroduced themselves to their envious followers. Non-holders coped by disparaging the long-awaited project. And Solana community members rejoiced in the successful reveal. This flurry of tweets caused #y00tsReveal to trend on NFT Twitter.

The virality comes as no surprise to followers of the Web3 space. y00ts is the long-awaited follow-on project to DeGods, the blue chip Solana NFT collection. After achieving success with DeGods, Dust Labs leveraged their rabid community and NFT marketing know-how to steadily build hype for their newest collection.

Long before launch, Dust Labs generated buzz for y00ts by announcing the y00tlist, a viral Twitter-based waitlist with a competitive application process. The y00tlist’s exclusivity, and novel approach to a pre-sale, caused widespread FOMO amongst NFT collectors and enthusiasts clamoring to buy in.

Applicants fortunate enough to be accepted were then granted t00bs, an NFT ticket granting them the opportunity to issue y00ts on the September 4 release date. However, five minutes before the collection was set to go live, it was delayed by Frank DeGods and the founding team, fueling more interest in the unrevealed collection.

With today’s highly-anticipated reveal, this push-and pull has finally come to an end.

Since launching DeGods in October 2021, Dust Labs has been establishing itself as a Web3 powerhouse. Whether it be launching viral NFT collections, hijacking the conversation on Twitter, or announcing splashy news, the team knows how to make a statement. At RaritySniper, we’ve covered some of their biggest moves.

In May 2022, a DAO formed by the DeGods community banded together to buy a basketball team for $625,000. The team, the Killer 3s, plays in the professional 3×3 basketball league the BIG3, which was co-created by entertainer Ice Cube in 2017.

In August 2022, DeGods moved into the top 5 for PFP NFT collections. The milestone was a first for a Solana NFT collection. The feat was accomplished when the floor price reached 400 SOL, but it continued to climb to 420 when news of the accomplishment got out.

Riding the success of becoming a top-5 NFT collection, Dust Labs announced a $7 million funding round. The “strategic round” included investments from Solana Ventures, Foundation Capital, FTX Ventures, Jump, Metaplex, and Chapter One.

Dust Labs’ meteoric rise in the Web3 space doesn’t appear to be slowing down. The y00ts art reveal is yet another accomplishment on its way to the moon.