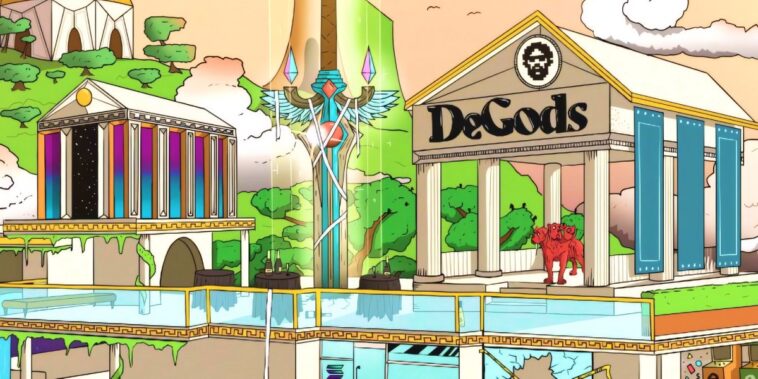 In a surprising Christmas day announcement, Rohun Vora, better known as Frank DeGods, revealed that top Solana NFT collections DeGods and y00ts would be moving to the Ethereum and Polygon blockchains in Q1 of 2023. Dust Labs, the accelerator program that gave birth to the collections, will also bridge to both Ethereum and Polygon during the same time frame.

The move will pit DeGods against the top NFT collections in the world, such as the Bored Ape Yacht Club, CryptoPunks, Doodles, and Azuki. Meanwhile, y00ts will join an Ethereum sidechain that has fostered partnerships with some of the top Web2 brands, including Starbucks, Meta, Warner Music Group, and more.

Since the announcement, the DeGods collection has reached a 505 SOL ($5,659) floor price, while y00ts rests at a 147 SOL ($1,647) floor. Both NFT sets have received a bump in 24-hour trading volume according to the analytics of Magic Eden, a top Solana marketplace, with DeGods trading volume jumping 242% and y00ts 380%.

In a Tweet, Vora thanked the Solana community, saying it got the two NFT collections to where they are today. But he added that in order for the collections to grow, they needed to explore new opportunities. In another Tweet, he stated that the y00ts brand has gotten stronger given the number of partnerships Polygon has formed in recent months.

The move to bridge both collections will require significant skill, and both announcements contained the message that bridges like this had not occurred before at this scale. As well, hackers often target blockchain bridges for their vulnerabilities, stealing sometimes hundreds of millions of dollars in cryptocurrency.

Although the loss of two of its top NFT collections and the ongoing FTX fallout will hurt Solana in 2023, the organization behind the blockchain was busy in 2022 and has big plans for 2023. Here are three stories involving it from this year.

First, five months ago, Solana opened a physical store in Manhattan. The store, which made its debut on June 28th in the high-end Hudson Yards shopping mall, focused on introducing people to Web3 and the Solana blockchain. It also served as a gallery space for Solana NFT art and sold merchandise.

Next, six months ago, Solana co-founder Anatoly Yakovenko announced the impending launch of a new Web3 smartphone. The smartphone, called Saga, will have 512 GB of storage and a 6.67-inch OLED display. Yakovenko said the phone would be available for purchase in Q1 of 2023.

Vora’s announcement about the move of DeGods and y00ts to new blockchains is big news, and as the trading volume shows, NFT degens are reacting with optimism. Here at Rarity Sniper, we’ll pay close attention for further developments in the story.