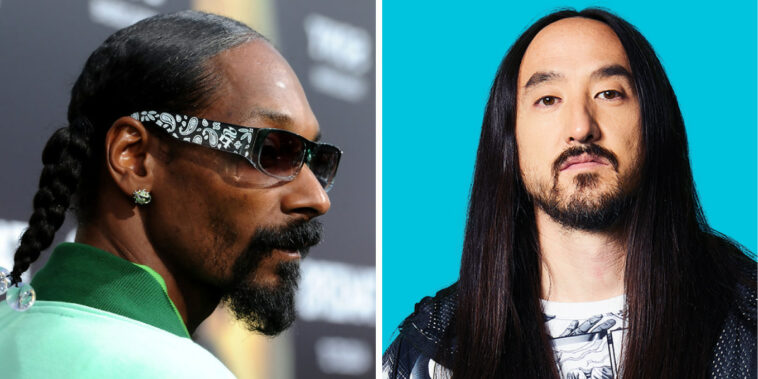 Rapper Snoop Dogg and DJ Steve Aoki announced they’ve collaborated on a new EP called Da Da that will drop as an NFT. People who already hold either an A0K1VERSE Passport or a Snoop Stashbox should have already received a sample NFT track in their wallet.

According to Steve Aoki’s Twitter feed, the “Alpha Doggz” duo airdropped two separate Da Da tracks as NFTs to people who had one of the NFTs mentioned above. Snoop Dogg and Steve Aoki are working with Gala Music on this latest venture.

Whoever held Aoki’s A0K1VERSE Passport on May 19th should have received the NFT track “Holy Grail.” Those with a Snoop Stashbox should now have the NFT for the song “Super Freak.”

The Da Da EP will have five songs, and recent reports suggest it will drop on Gala Music on May 23rd. However, Steve Aoki tweeted on May 20th that the release of Da Da was being “pushed” as the team works on “a few tweaks.”

It’s widely known that Snoop Dogg and Steve Aoki have a shared passion for creating and collecting NFTs. Both musicians hold prominent NFTs like Bored Apes and Doodles, and they frequently drop NFTs of their art and music.

Snoop Dogg announced that he would transition his Death Row Records into a 100 percent NFT studio earlier this year. In fact, Death Row Records is helping produce the upcoming Da Da EP with Gala Music. The Doggfather also released his B.O.D.R album as an NFT on Gala.

Steve Aoki and Snoop Dogg also have a large amount of virtual land in The Sandbox metaverse. Aoki’s Sandbox space is known as “Aoki’s Playhouse,” and Snoop Dogg’s digital territory is called “Snoopverse.”

Snoop Dogg also released his first 10K collection of NFTs on The Sandbox earlier this year. Called “Doggies,” these voxel NFTs are playable avatars within The Sandbox ecosystem.

These two musicians are so busy exploring all facets of blockchain technology that it’s hard to keep track of their many ongoing projects. If the past is any indication, Steve Aoki and Snoop Dogg will continue to push the boundaries of Web3 in the ensuing months.