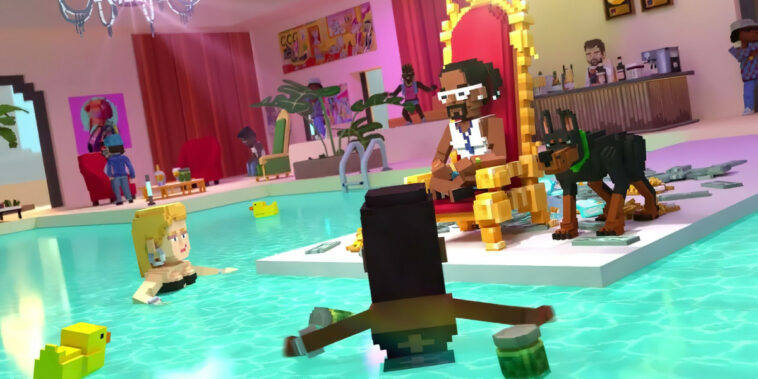 Snoop Dogg just added another “first” to his growing list of Web3 projects. This time, the Cali-born rapper & producer revealed the world’s first professional music video filmed in the metaverse.

Released on April 1st, Snoop Dogg’s video for the B.O.D.R. track “House I Built” was filmed within The Sandbox metaverse. Most of the shots in this music video come from the “Snoopverse” section of The Sandbox. However, you could also see the literal Snoop Dogg playing Animoca Brands’ signature game. The production team used in-game production tools like VoxEdit and Game Maker to make Snoop Dogg’s latest music video.

“House I Built” is one of 18 songs on Snoop Dogg’s 20th studio album B.O.D.R. Earlier in 2022, Snoop Dogg announced B.O.D.R. would be available as his first NFT album on the platform Gala Games. Snoop Dogg also said he would make his Death Row Records — which produced B.O.D.R. — into the first NFT music studio.

Currently, the “House I Built” music video has over 2.2 million views on YouTube.

Snoop Dogg Isn’t Slowing Down in his Web3 Push

Snoop Dogg is one of the most active celebrities in the fields of cryptocurrency and the metaverse. Just a few days ago, Snoop Dogg partnered with CoinTelegraph and Crypto.com to release an NFT single with country singer Billy Ray Cyrus. Speaking of Crypto.com, the Doggfather recently dropped his “A Journey with the Dogg” NFT collection on the exchange’s NFT market.

Recently, there have been reports that Snoop Dogg is working on yet another NFT-related project, this time on the Cardano blockchain. Cardano’s Clay Mates collection announced they are working closely with Snoop Dogg on future NFTs and metaverse experiences.

Besides building on Web3 platforms, Snoop Dogg is an avid NFT collector. Last year, Snoop Dogg revealed he’s behind the famous NFT Twitter account @cozomomedici. Some estimates suggest Snoop Dogg has over $17 million worth of valuable NFTs. Just a few projects Snoop Dogg has in his NFT collection include CryptoPunks, the Bored Ape Yacht Club, and Art Blocks.