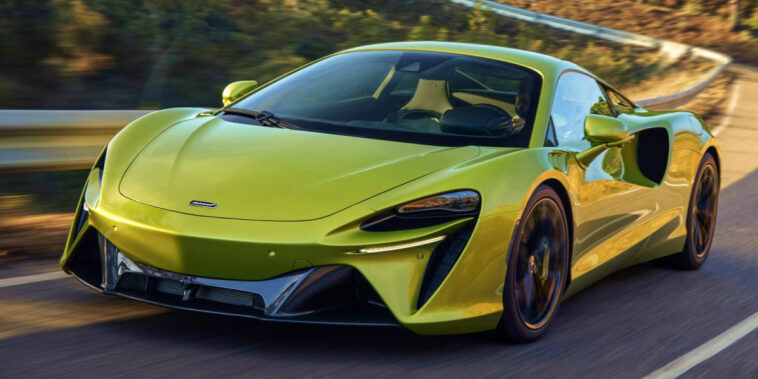 Gareth Dunsmore, the Chief Marketing Officer at McLaren, said the MSO LAB digital community presents an opportunity for the company to connect with customers and fans in a new way. The LAB is a natural home for McLaren’s metaverse push because it is the engine of the company’s supercar innovation.

The mint price for a single NFT is 0.5 ETH. Those looking to gain access to the drop may be out of luck. McLaren is reserving the first wave of mint spots for people who own a McLaren car. The second wave (and there are only two announced) is for people “invited to mint.”

For those who manage to snag an NFT, a bevy of IRL perks awaits. According to a McLaren press release, NFT holders will receive “unique member experiences, opportunities and utilities.” These utilities include the ability to attend McLaren automotive events, a behind-the-scenes virtual tour of the McLaren Technology Centre, and an unpublicized design sketch.

However, there may be hope even without an invite for McLaren supercar fans who want in on the action. After the mint, the NFTs will be available on the McLaren NFT marketplace. Although pricing is likely to be steep, an enterprising degen might be able to snag an NFT on secondary.

If you follow Rarity Sniper news closely, you might have noticed that McLaren dabbled in Web3 before. Two months ago, the company partnered with InfiniteWorld to create NFTs for its luxury supercars. And the British company isn’t the only luxury supercar maker entering Web3.

Lamborghini, which has roots in cryptocurrency and NFT culture, auctioned a supercar at Sotheby’s with an accompanying NFT. The event paired Steve Aoki and Krista Kim, two Web3 natives, to add music and art.

Ferrari has continued its Web3 enthusiasm this year. In Q4 2021, the Ferrari CEO said on an earnings call that Web3 and non-fungible tokens “could be very interesting to us.” It also has partnered with the Velas Network to release a set of Ferrari NFTs. The blockchain company is an official sponsor of the Ferrari Esports league.

And CarForCoin, a marketplace where buyers can purchase exotic cars for cryptocurrency or cash, announced two months ago that it would start auctioning cars as NFTs. In this arrangement, people would bid on the NFT representing the car, and the winner would receive the car and a QR code linking to the NFT.

Time will tell if McLaren’s new NFT collection will be successful, but there’s little doubt that many luxury car makers are entering Web3.