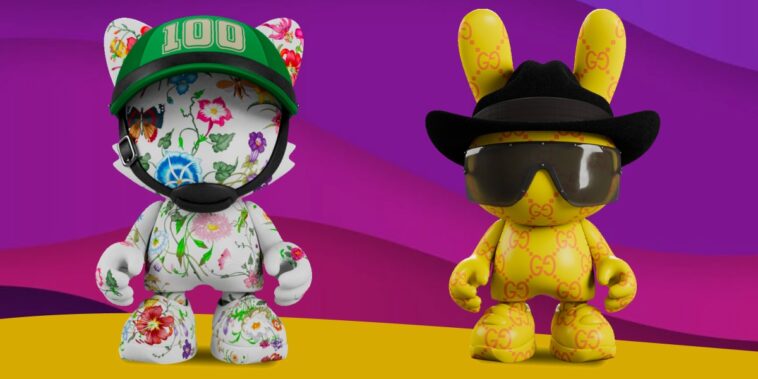 Superplastic and Gucci had a final surprise for collectors of SUPERGUCCI’s Janky NFT this past Sunday, dropping a companion Guggimon NFT that comes with a ceramic piece made in Superplastic’s Italian factory. Janky and Guggimon were the creators of the SUPERGUCCI NFT series, and, as an Instagram post said, the two go everywhere together.

Because the drop came as a result of a snapshot, buyers interested in the Guggimon NFT would have had to buy the Janky NFT before the snapshot or purchase the Guggimon NFT on the secondary market. So far, the SUPERGUCCI collection has netted more than $20 million in total sales, with the floor price of the collection currently standing at 1.18 ETH.

Paul Budnitz, CEO of Superplastic, said that the brand has 10s of millions of followers, and to partner with Gucci, one of the most recognizable companies in the world, was an exciting collaboration for both companies.

The SUPERGUCCI collaboration marked Gucci’s first foray into Web3, one that has led to the company accepting cryptocurrencies at its physical locations and partnering with NFT marketplace SuperRare on a curated digital art collection. Superplastic, for its part, has not been quiet either, collaborating with Yuga Labs to create vinyl Bored Ape Yacht Club toys.

One interesting announcement that occurred with the final SUPERGUCCI NFT drop is that another Gucci NFT collection will debut in October. Guccighost, as the company is calling it, has few details, but given its spooky name and the timing of the collection, it may perfectly align with the coming Halloween season.

While Gucci’s Web3 exploration started with the Superplastic partnership, the company has continued making moves in the nascent space to the present day. Here are three stories Rarity Sniper has covered involving Gucci and Web3.

First, Gucci made waves in the NFT space just last week by announcing it would accept ApeCoin at U.S. stores. The news came just three months after the company shared customers could now pay with 11 cryptocurrencies, including Bitcoin and Ether, at its physical locations.

Second, Gucci recently partnered with NFT marketplace SuperRare to launch a collection titled “The Next 100 Years of Gucci.” The NFT set celebrated Gucci’s past while looking towards its future and featured artists Drew Young and Aliendope, among others.

Third and finally, Gucci has created a metaverse experience in Roblox based on the traditional Italian piazza. In the experience, players can pursue quests, play games, and socialize while taking a break from other activations in the metaverse.

The final SUPERGUCCI NFT drop is certainly exciting news for holders of the Janky NFT and also shows that Gucci continues to make moves in the space, even during a market downturn.