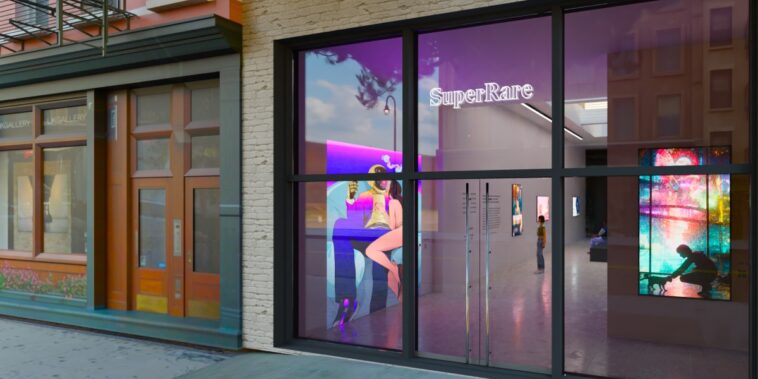 With New York Fashion Week set to get underway, many organizations are choosing to tie-in Web3 elements to traditional NYFW shows and galleries. SuperRare, a leading NFT art marketplace, announced on Instagram two days ago that it is joining the fun. Together with Gucci, it will launch a CryptoArt Couture gallery in SoHo. Here are all the details.

Mika Bar-On Nesher, the SuperRare curator, said that the exhibition will explore the intersection between fashion and the metaverse. They added that SuperRare is “thrilled” to see everyone from Gucci to designer Marrisa Wilson embracing non-fungible tokens.

SuperRare is a top NFT art marketplace, amassing $260 million in sales since inception. It also has led to artists earning over $150 million, with top pieces on the website often selling for tens of thousands (if not more) dollars. It also has a history of crossing over into the real-world, as seen with its IRL galleries in NYC.

The presence of Gucci may come as a surprise to some people, but the luxury brand has been at the forefront of Web3 innovation from a brick-and-mortar company for months. It has also partnered with SuperRare on a few projects before, including the Vault Art Space.

While New York Fashion Week is generally a time for celebrating the latest outfits, some companies have been taking it a step further, introducing Web3 tech into their shows or dropping NFT collections. Here are three stories Rarity Sniper has covered involving the intersection between NYFW and Web3.

First, there is Bloomingdale’s. The company announced it would launch a virtual store for its 50th anniversary, coinciding with New York Fashion Week. The store will feature different metaverse experiences, as well as top brands Baccarat, Byredo, and Ralph Lauren.

Second, there is PUMA. The German sports company unveiled a Web3 portal on September 7th to function alongside its IRL NYFW show. The portal contains three separate metaverse experiences, along with customized experiences for certain users.

Third and finally, there is Afterpay. The company best known for “buy now, pay later” revealed two weeks ago that it would drop an NFT set during NYFW. The collection features different artists offering “keys” that unlock physical or digital rewards during the event.

SuperRare’s IRL NFT art gallery is big news, as it blends the physical and digital worlds. And as the stories above show, this type of innovation is becoming more popular. Here at Rarity Sniper, we’ll keep our ears to the ground for further developments in the story.