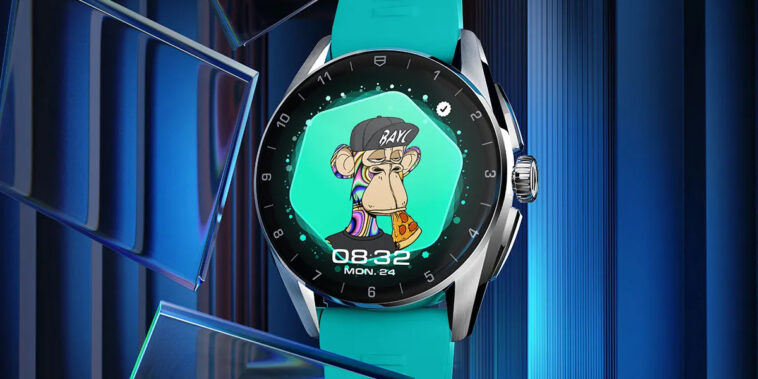 The Swiss watchmaker TAG Heuer says its Connected Calibre E4 smartwatch can display and authenticate NFTs. After Calibre E4 owners download the latest software update for their mobile app, they could connect their watch with a MetaMask or Ledger Live to verify their favorite NFTs.

Similar to NFT profile pics on Twitter, authenticated NFTs on the Calibre E4 will have a hexagonal border. TAG Heuer says this new function will work with JPEG and GIF NFTs on the Ethereum blockchain.

According to Decrypt, TAG Heuer worked with members of prominent NFT projects when designing its NFT functionality. In addition to the Bored Ape Yacht Club, TAG Heuer collaborated with people holding CryptoPunks, World of Women, and Clone X NFTs.

For the time being, this new NFT feature is limited to Ethereum NFTs stored on a MetaMask or Ledger Live wallet. However, TAG Heuer’s CEO Frédéric Arnault hinted he was interested in developing more Web3 applications.

Despite the reservations of his father, LVMH CEO Bernard Arnault, Frédéric Arnault has been a strong supporter of crypto and NFTs. In fact, shortly before revealing the Calibre E4’s NFT feature, Frédéric Arnault bought Bored Ape #4215.

TAG Heuer announced in May that it would accept cryptocurrency for products like the Calibre E4. With the help of Bitpay, customers could use their preferred crypto to shop on TAG Heuer’s website.

NFT Fans Have More Ways to Display Their Collectibles

While Twitter is still the top site for displaying authenticated NFTs, more companies are offering ways for collectors to show off their favorite tokens. For instance, Samsung released a novel NFT display function that shares some traits with TAG Heuer’s NFT feature.

People who buy one of Samsung’s 2022 Smart LED TVs could set their favorite NFTs to display in ambient mode. However, at this time, Samsung only allows users to buy, trade, or display NFTs from Gemini’s Nifty Gateway.

There are also many social media sites besides Twitter that help users prove their NFT ownership. Most significantly, Meta’s Instagram is testing a new NFT feature with select users. Depending on the success of this project, Meta may expand its NFT offerings to other sites like Facebook.

Rarity Sniper has also reported on sites like Linktree and Behance that are now helping users display, authenticate, and monetize their NFTs.

As more companies roll out NFT integrations, it should be seamless for NFT holders to validate their ownership.