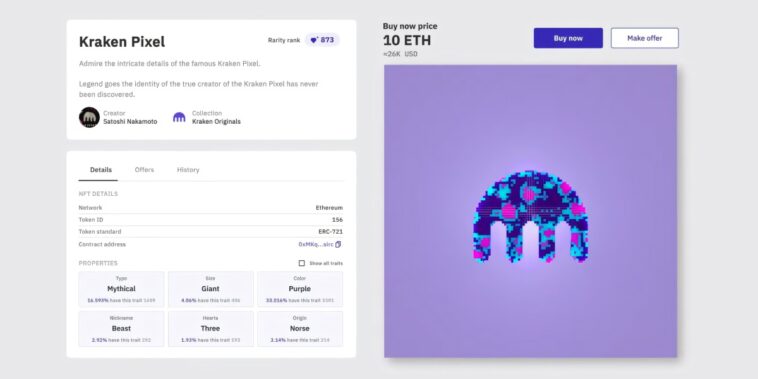 One of the most-trusted cryptocurrency exchanges in the world, Kraken, just announced the public beta launch of Kraken NFT— a new marketplace to discover and trade non-fungible tokens.

Kraken NFT marketplace will open with over 110 of the highest-trading volume NFT collections, and new collections will be added regularly after a comprehensive vetting process. Its NFT screen tool on CryptoWatch will also let investors track real-time NFT market data for the collections.

Kraken’s mission is to accelerate the adoption of cryptocurrency, and according to co-founder and former CEO Jesse Powell, NFTs can do just that. Powell said that NFTs “have the potential to become the way most people start interacting with crypto.” He added that Kraken was the first major crypto exchange to “list Ether and recognize the promise of NFTS.”

The new NFT marketplace will be accessible to people just starting a collection to professional NFT flippers, with the aim of being “the most secure, accessible, and dynamic marketplace in the industry.”

Kraken will start with NFT collections built on Ethereum and Solana, though more blockchains are expected soon. The company says it has a long-term commitment to the NFT ecosystem.

Founded in 2011, Kraken is one of the world’s longest-standing digital asset platforms. It was one of the first exchanges to offer spot trading with margin, staking, parachain auctions, and index services for crypto. It was also the first crypto exchange to ever conduct a Proof-of-Reserves audit, and is committed to doing so on a regular basis.

A Myriad of New NFT Marketplaces in 2022

Four months ago, LG Electronics launched an NFT marketplace called “LG Arts Lab.” The marketplace can be accessed directly through a Smart TV home screen, and users can browse, buy, sell, trade, and display NFTs on their TVs.

Next, the iconic British auction house Christie’s announced a new NFT marketplace that allows the house to conduct NFT auctions on the Ethereum network from start to finish. It was developed in partnership with Manifold, a smart contract development startup, Chainanalysis, a blockchain analytics firm, and Spatial, a metaverse developer company.

Lastly, Mattel, a global leader in children’s toys, launched an NFT marketplace on the Flow blockchain. The company said NFTs allowed them to transform their popular intellectual property rights into digital art. It hosted its first NFT mint on December 15th, featuring a series in the Hot Wheels set.

It’s becoming more clear that the world can have more (much more) than one NFT marketplace. But Kraken is a leading crypto exchange with over a decade in the industry, something very few companies can say. It will take time to see if the Kraken NFT marketplace will be popular with users, but given its history and reputation, we think there’s a good bet it takes off.