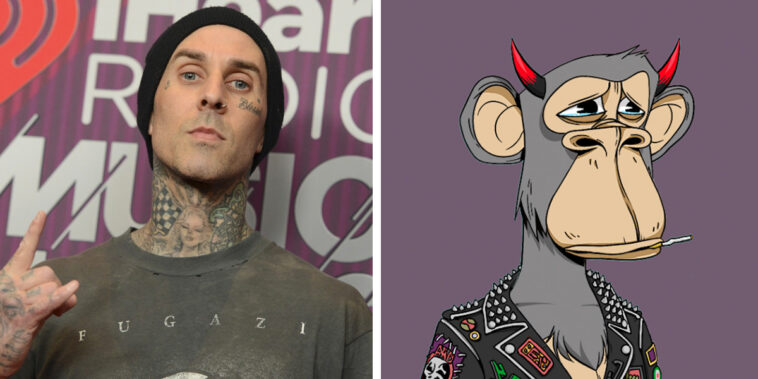 Shortly after purchasing Bored Ape #7765 on Saturday morning, Barker changed it to his Twitter profile picture and tweeted, “Does this look like me?” The Ape is a six-trait ape with devil horns, gray fur, a punk leather jacket, and a cigarette in its mouth.

Eminem and Meek Mill also bought into the highly sought-after NFT collection over the past couple of weeks, adding to the list of musicians and celebrities who own Apes.

Bored Ape Yacht Club is an NFT collection of 10,000 dazed-looking Ape avatars released in April 2021 by Yuga Labs that has seen enormous success. They are owned by celebrities like Jimmy Fallon, Steph Curry, and Post Malone and have sold for hundreds of thousands and even millions of dollars.

People who bought in early have seen huge rewards. Besides the digital art itself, owners of apes are granted membership into a vibrant, active, and increasingly influential community that comes with a myriad of benefits.

It will be interesting to see who buys into BAYC in the future, and of course, BAYC members and NFT Twitter are already buzzing with speculation, especially since Barker’s partner is Kourtney Kardashian.

A common question circulating the BAYC community this weekend was expressed by Dooks.eth (@Dookie_Kong) in the tweet “@Travisbarker is in the BAYC, how long before we see our first Kardashian NFT?”

Well, only time will tell. But for now, it’s Barker’s time to flout his Bored Ape NFT and be welcomed into the Bored Ape Yacht Club community.