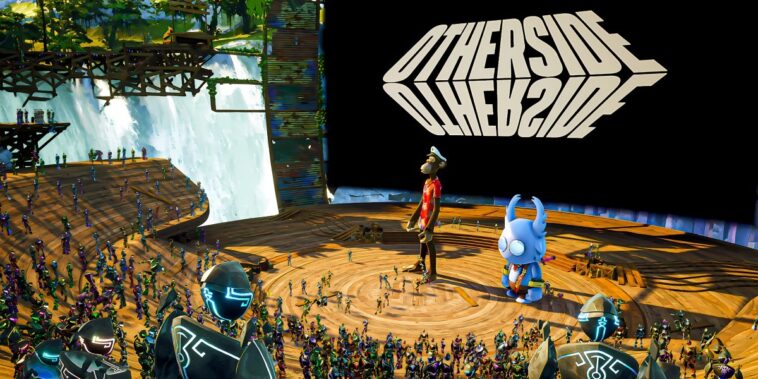 Yuga Labs co-founders Wylie Aronow and Greg Solano sat down with Decrypt for a podcast recently and shared their thoughts on a wide range of topics, including the Otherside metaverse. The big news is that the two believe it will end up being like a semi-decentralized, “Web3-native Roblox.”

Roblox, the online video game that has 10s of millions of daily active users, relies on corporate brand partnerships and user-created experiences. But while the creators of Roblox gear it towards a younger demographic, Aronow and Solano want to target the Otherside metaverse to a more adult audience.

And although Yuga Labs is not forgetting Bored Ape NFT holders in the process, the two co-founders want to show the world what they can do with their war chest of funding. Earlier this year, the NFT and gaming company raised upwards of $450 million at a $4 billion valuation from some of the top venture capitalists in the space.

Solano remarked in the podcast that they want to give users in the Otherside metaverse an enthralling story to build on top of. “We want to tell an amazing story,” Solano said about this “strange world” we’ve found ourselves teleported into. The co-founders want to give builders an extra dose of creativity to help with the building process.

Yuga Labs also plans to do things a little differently than a traditional gaming company. Because most gaming companies do iterations of a game while releasing trailers and teasers, the reveal is slow. Aronow and Solano want to allow NFT holders to “test” the game through trips and explorations of the world.

Yuga Labs is the largest NFT company by far. By one count, it has around 65 percent of the NFT market’s share through its ownership of the Bored Ape Yacht Club, CryptoPunks, and Mutant Ape Yacht Club collections. And it has been busy in 2022. Here are three stories involving it and Web3 this year.

Third and finally, there is Yuga Labs hiring of a Christie’s executive. Four months ago, Noah Davis, the previous head of digital sales at Christie’s, tweeted that he was leaving the auction house to serve as the CryptoPunks’ “brand lead.” In his first words, he revealed he wouldn’t mess with the brand by putting them in cringe TV shows or lunch boxes.

Yuga Labs interview with Decrypt shows the NFT company is focused on making the Otherside metaverse the best it can be. And as the other stories show, Yuga Labs has been very busy in 2022. It wouldn’t surprise then if the company makes other moves before year’s end.