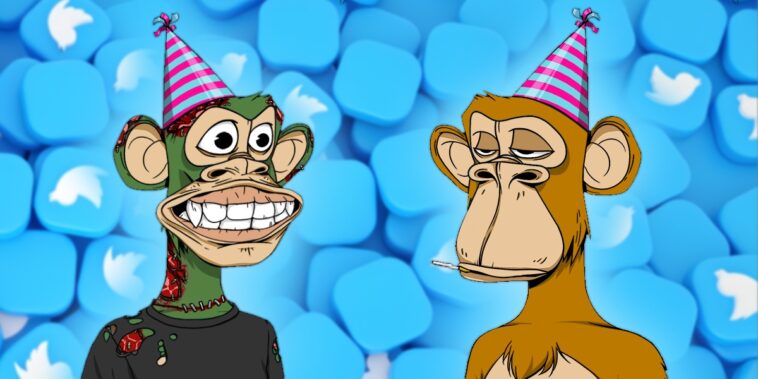 Close watchers of the Bored Ape Yacht Club Twitter account may have noticed something different on Monday morning: Rather than the typical six digit listing of the number of its followers, a plain 1M had replaced it.

Hitting the 1 million follower mark for the BAYC Twitter account was cause for celebration on NFT Twitter, with some saying they had followed the account “before it became famous.” BAYC published a Tweet celebrating the milestone, writing that it was hosting a “celebratory community chat” Tuesday evening to cover all BAYC had accomplished in the past year and a half.

Some publications speculated that BAYC would drop some “alpha” during its celebratory chat, possibly announcing the next step in its roadmap. The timing would be perfect. The BAYC roadmap has fallen into a lull as attention has switched to Yuga Labs’ (the creators of BAYC) Otherside metaverse project. Some are saying the next stage — “The Trial of Jimmy the Monkey” — is imminent.

To put the 1M follower milestone in context, the BAYC collection has just 6,400 unique owners in the 10,000-NFT collection. That means the number of people who follow the BAYC Twitter account dwarfs the number of BAYC collectors by a considerable margin. Part of that might be due to the prestige of BAYC.

NFT enthusiasts generally regard it as the No. 1 NFT collection, having passed CryptoPunks in late 2021. Early collectors of BAYC have reaped financial rewards sometimes amounting to millions of dollars, and the showrunners — Yuga Labs — are considered innovators in the field.

Yuga Labs, the creators of the Bored Ape Yacht Club, has been busy in 2022. And it seems like almost nothing it does can go wrong. It purchased a top-flight NFT collection from a competitor, dropped a cryptocurrency, and launched a metaverse. Here are three stories Rarity Sniper has covered about Yuga Labs in 2022, in chronological order.

Five months ago, Yuga Labs shocked the NFT world by purchasing the CryptoPunks and Meebits collections from competitor Larva Labs. The acquisition gave Yuga the two top NFT collections in the world and solidified it as a leader in the space.

Also five months ago, Yuga Labs released ApeCoin to holders of the Bored Ape Yacht Club and Mutant Ape Yacht Club NFTs. Spectators widely hailed the move as it gave owners of those NFTs liquidity without them having to sell their NFTs. Some people received airdrops into the millions of dollars.

Then, there was the launch of the Otherside metaverse. Yuga Labs initially raised $300 million as a gas war developed around the OtherDeeds drop. Although many questioned the move to not use an optimized contract, the hubbub soon subsided as Yuga refunded lost gas fees. Later, Yuga would conduct the “First Trip” in the metaverse to much affair.

The BAYC Twitter account hitting 1 million followers is well-deserved considering its position as the leading NFT collection in the space. Here at Rarity Sniper, we’ll be keeping our ears to the ground for further developments in the story.