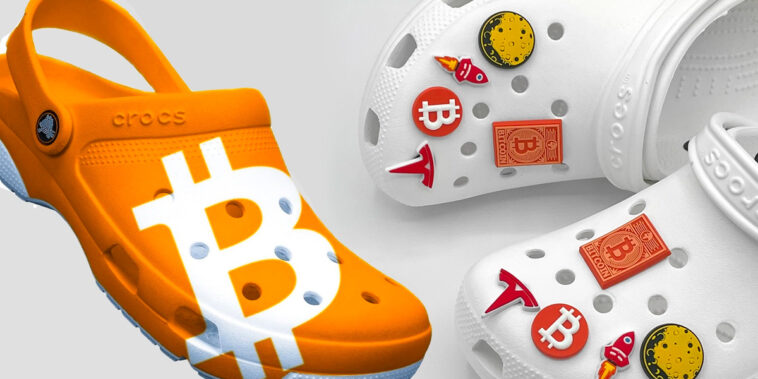 Crocs has become the latest major footwear brand to throw their hat into the non-fungible token (NFT) ring. On January 11th, the Colorado-based company known for their comfy foam shoes, filed a trademark registration with the U.S. Patents and Trademarks’ Office.

The trademark enables Crocs to create non-fungible tokens of “footwear, clothing, bags, accessories and charms for decorating” as well as software to send, receive and trade NFTs. As many other brands are doing, Crocs could create their own online NFT marketplace to sell their digital assets to consumers.

Reports say Crocs apparently filed on an “intent-to-use” basis, which means just like what it sounds—that Crocs is preparing to use the trademark.

In the months that followed Mark Zuckenburg’s announcement to enter the Metaverse and change Facebook’s name to Meta, several big brands have been rushing in to get a piece of the NFT market. The market reported over $25 billion in sales last year, so interest from big companies should come as no surprise.

Furthermore, the number of celebrities, musicians and athletes that have been buying NFTs is increasing rapidly, and brands like the GAP and Hennessy, as well as organizations such as the NBA and NFL have released their own NFT collections and look posed to release others.

Of course, more important for Crocs is that fellow footwear and apparel brands including Nike, Adidas and Under Armour are getting their feet wet in NFTs. The latter two made millions on recent drops of digital sneakers and apparel, which people purchase to show off in existing decentralized metaverses such as Decentraland and The Sandbox.

While it may sound strange to the novice, metaverses and digital worlds that run on blockchain technology and cryptocurrencies are evolving and gaining mainstream adoption. In fact, Nike is going as far as to design their own metaverse with Roblox—Nikeland.

All of this suggests a myriad of brands and companies are rethinking how to compete in the digital marketplace in 2022. And if Crocs has luck in the NFT space, they may be able to build on a big 2021, when the company enjoyed 67% in growth.

Although Crocs made no official statement about filing the trademark, we don’t expect it will be long before we hear more from Crocs in the NFT space.