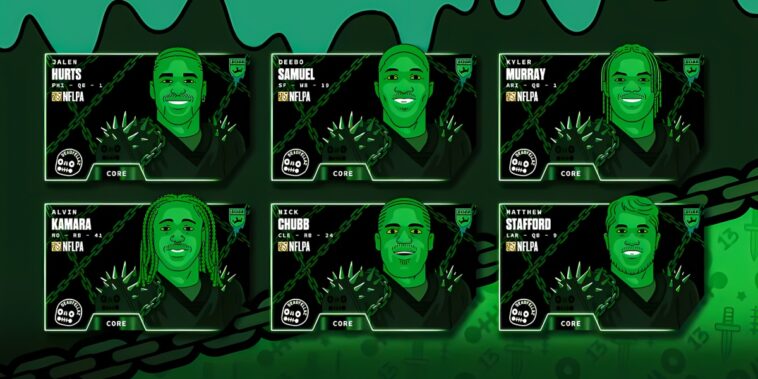 In a sign that the spooky season has arrived, NFT project Deadfellaz is joining forces with DraftKings to turn 13 NFL players into zombie trading cards. The cards will be available on October 25th with two rarity categories: common and rare. Each player will have their own common trading card version and rare version.

DraftKings plans to use the cards as part of its Reignmakers NFT fantasy football tournament, which sees weekly prizes of up to $1 million. Collectors who buy the cards will be able participate in giveaways as well, one of which involves an airdrop of a special Deadfellaz NFT. Although the giveaways will take place around Halloween, Reignmakers players can use the cards throughout the NFL season.

Six of the 13 NFL players who will become zombie trading cards are Nick Chubb, Jalen Hurt, Alvin Kamara, Kyler Murray, Deebo Samuel, and Matthew Stafford. The Deadfellaz and DraftKings team will announce the rest at a later date. The branch of the NFLPA that covers trading cards has signed off on the project.

Matt Kalish, DraftKings co-founder, had high praise for the Deadfellaz NFT project, saying it had established itself as one of the most impactful Web3 projects to date. He added that this collaboration will give Reignmakers players a Halloween twist for the games around the time of this holiday.

Deadfellaz has been on a collaborations tear as of late, partnering with many different companies to bring the project’s IP to a wider audience. As Rarity Sniper reported, it collaborated with Wrangler a few weeks back to put NPCs into select jeans. It also has partnered with snowboarding company Gilson and a Steve Aoki brand in the past month.

Even though the cryptocurrency market has slumped in recent months, artists, companies, and musicians are still collaborating and creating new content. Here are three stories Rarity Sniper has covered this year involving collabs.

Third and finally, there is the DS & Durga collab with FVCKRENDER. Three months ago, the perfume company and NFT artist partnered to create an NFT collection of perfumes. Interestingly, the art for the NFTs corresponded to specific notes in the perfumes.

The Deadfellaz-DraftKings collab bodes well for the NFT space, as it shows that more NFT companies are using their IP to reach wider audiences. Here at Rarity Sniper, we’ll pay close attention for further developments in the story.