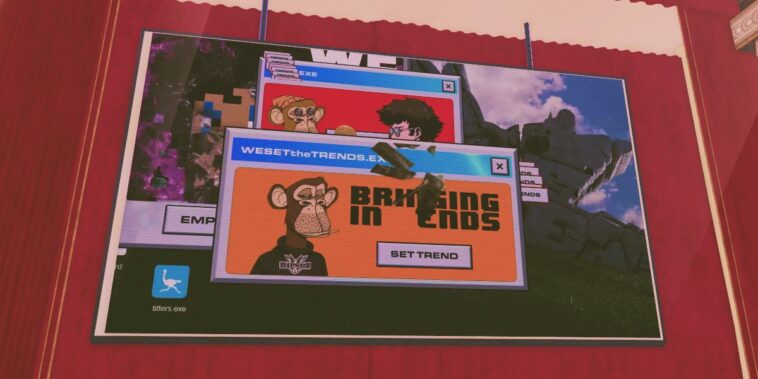 Rappers Jim Jones and Migos premiered a video of “We Set The Trends” featuring NFT art in the metaverse game Decentraland. According to Decentraland’s official tweet, this new video debuted in the Metaverse Theatre on June 2nd at 10 PM UTC.

If players missed the premiere of this event, they could still visit Decentraland to see Jim Jones and Migos’ recent collaboration. Recent reports suggest this video will continue to air in Decentraland’s Metaverse Theatre till June 10th. The team behind this video also set up a Discord channel for news on upcoming NFT drops.

Musicians Experiment with the Metaverse

Many in the music industry have quickly adapted to Web3 innovations like NFTs and the metaverse. Like Jim Jones and Migos, musicians seem to be interested in using these technologies to generate new sources of income and better engage with fans.

A few months before “We Set The Trends” premiered, Snoop Dogg showed off the world’s first music video shot inside a metaverse. The iconic Cali-born rapper used tools within The Sandbox to create a film version of his new track “House I Built.”

And that’s just one of the countless Web3 innovations Snoop Dogg has introduced to the music industry. Over the past year, the Doggfather vowed to make his Death Row Records an all-NFT studio, and he has collaborated on NFT music drops with DJ Steve Aoki and country singer Billy Ray Cyrus.

Although Snoop Dogg is one of the most prolific musicians in the metaverse, many other artists are creating in this new field. For example, The Chainsmokers revealed the NFTs for their album So Far So Good will award holders with royalty perks. The Weeknd also announced he would use Web3 in his upcoming concerts to connect with fans and give to charities.

There’s no telling how the music industry will change in the coming years, but Web3 is having a significant impact.