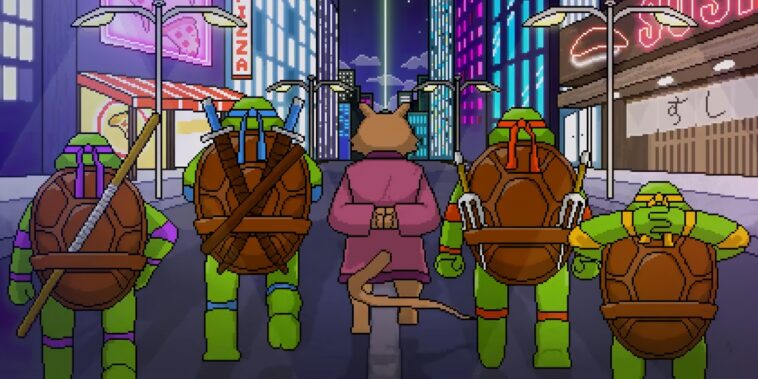 On Wednesday, NFT project Chimpers announced it has partnered with the Teenage Mutant Ninja Turtles franchise and its parent company Paramount. The partnership is for a “long-term adventure,” Chimpers wrote in a Tweet:

The video in the Tweet shows Master Splinter and the four Teenage Mutant Ninja Turtles walking down a street. Representatives (presumably) from Chimpers teleport before the two parties meet in a field under a crescent moon. Master Splinter and the old wise man in the Chimpers group shake hands, indicating a sealing of the deal for the partnership.

Although details about the partnership are scarce, that hasn’t stopped some NFT traders from capitalizing on the news. The floor price for the Chimpers collection rose to 1.5 ETH soon after the Tweet in question, though it has since fallen to 1.43 ETH or $1,708 per Chimper. The collection has largely held ground in the NFT bear market, dropping a relatively small percentage in floor price while much of the NFT market has struggled.

The Chimpers NFT project is a mix of two different NFT collections: a 100-NFT Genesis Chimpers set and a 5,555-NFT generative PFP collection. The lore recounts the story of these monkeys, who have expanded their rule across many galaxies. This world of “warriors, gods, demons, mages,” and more is now at the brink of war.

Even during the cryptocurrency bear market, many Web3 companies are forming partnerships. Here at Rarity Sniper, we’ve written countless stories in the preceding months about companies partnering up for a variety of reasons. Here are three.

First, Magic Eden and Polygon announced yesterday that they were partnering. Their aim: to grow GameFi, a subset of Web3 that focuses on the mesh between gaming and finance. The partnership will also further Magic Eden’s goal of becoming the top marketplace supporting multiple blockchains.

Next, TCL Electronics revealed in October, 2022, that it was partnering with Roblox to bring its products to the metaverse. The Chinese technology company unveiled its metaverse activation just in time for Halloween, featuring several TCL products in its Roblox “Dream House.”

Finally, two months ago, NFT project Cool Cats shared that it was partnering with Animoca Brands. The goal of the partnership is to bring Cool Cats into the gaming sector. The two have already collaborated on their first joint project: A World Cup-themed NFT collection that involves IRL prizes.

Chimpers partnership TMNT and Paramount is big news for an NFT industry that has fallen on hard times during the bear market. Here at Rarity Sniper, we’ll keep our ears to the ground for further developments in the story.