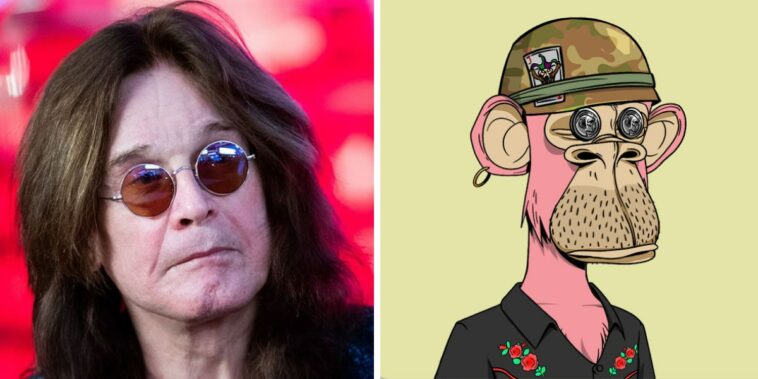 On Osbourne’s official Twitter feed, he told his 5.3 million followers: “@MrsSOsbourne and I just picked up this Bored Ape. Tomorrow at 4 PM ET, Sharon will be biting the Bored Ape with her @CryptoBatzNFT to create a MutanBat live on Twitter Spaces!”

“CryptoBatz” refers to Osbourne’s first NFT project, which he launched at the start of 2022. Osbourne claims he designed each of the 9,666 animated bats in the CryptoBatz portfolio.

Interestingly, Osbourne allows CryptoBatz holders to “mutate” their bat after “biting” an NFT in one of five high-profile projects. Along with the Bored Ape Yacht Club, your CryptoBatz NFT could take a “bite” out of CrypToadz, SupDucks, Alien Frens, and CyberKongz.

To demonstrate how a CryptoBatz mutation works, Ozzy’s wife Sharon Osbourne showed off the mutated version of CryptoBat #61 on Twitter. After biting Bored Ape #9939, CryptoBat #61 took on many of the features in the initial Bored Ape NFT — including pink fur and coins on its eyes.

Ozzy Osbourne joins a long list of celebrities that have already bought into BAYC. A few other prominent musicians in the BAYC include Justin Bieber, Eminem, and The Chainsmokers.

From a pure numbers perspective, Bored Ape #9939’s cowboy shirt is the rarest attribute. Only 119 other Bored Apes are wearing this easy-to-miss rose-patterned shirt.

Bored Ape #9939’s Vietnam-era helmet and gold earring also bump up its total rarity score. Roughly 220 other Bored Apes are wearing this military cap, and about 460 have a gold-hooped earring.