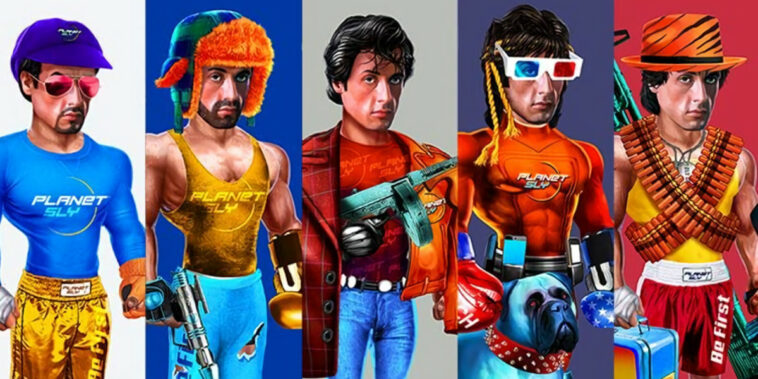 Sylvester Stallone is returning to the ring with a collection of non-fungible tokens (NFTs). The actor best known for starring, writing, and directing the Rocky series is launching the PlanetSly NFT collection — comprised of 9,997 generative digital art pieces commemorating his life and career.

For some lucky fans, the NFTs will grant exclusive access to interact with Stallone, including a virtual movie screening, dinner and an afterparty in Miami, and other exclusive events.

The NFT project also celebrates the underground nature of Rocky and Stallone himself, as well as the fact that Stallone is the only American actor to realize several number one box office hits throughout six consecutive decades. The NFT collection was created by BIZ.com, which is owned by Stallone and the entrepreneur Bill Zanker.

The NFTs are being called SLYGuys and to be eligible for the invitation-only presale collectors must show their “SLYLove” by posting videos on Instagram, Twitter, TikTok, and other social media channels that demonstrate their Stallone fandom.

The project will be minted on the Ethereum blockchain in April and Stallone will autograph 25 of the rarest NFTs. More information about the SLYGuys NFT drop is being relayed on PlanetSly.com.

Is film being transformed by NFTs?

Stallone isn’t the only Hollywood actor to get involved with NFTs. We’ve seen several people in the film industry invest in NFTs or launch their own projects over the past couple of months.

For example, Mila Kunis is working on an interactive NFT series, Reese Witherspoon has plans to bring the wildly successful collection World of Women to film and TV, and Quentin Tarantino sold a Pulp Fiction NFT for $1.1 million dollars.

Because NFT technology allows creators to interact with their audience in new ways, raise funds, create new windows of distribution, and improve royalty rates for artists, it’s no surprise actors, directors, and writers are taking advantage of the new technology.

The movie theatre giant AMC even announced they would be accepting DogeCoin and Shiba Inu payments for ticket purchasers, in a move that further connects cryptocurrency, Web3, NFTs, and cinema.

We’ll be keeping our eye out for more news from the Stallone camp. We also expect some of the fan videos required for an allowlist spot to be entertaining.