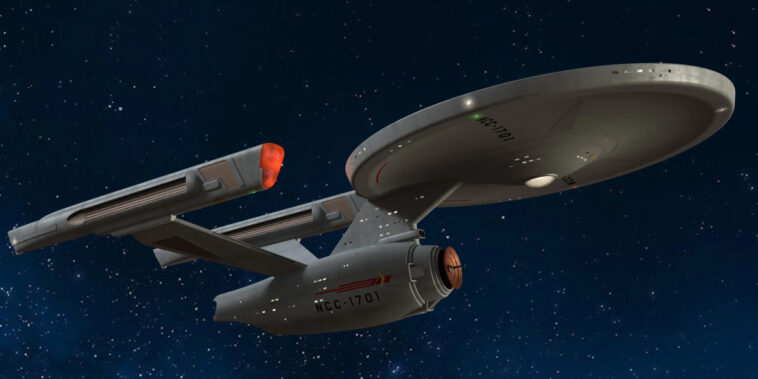 Paramount Pictures is launching its first “mission” into the metaverse with a “Star Trek” NFT sale. At 11 AM ET on April 9th, Paramount will drop a collection of “Star Trek” spacecraft NFTs on its RECUR-backed NFT platform. This “Series 0” NFT collection will feature randomly generated one-of-one spaceships that holders could use in future metaverse games.

According to Paramount’s startrek.xyz portal, the “Star Trek: Series 0” NFTs could be in one of two packs: Admiral or Captain. There will be 5,000 Admiral NFTs and 15,000 Captain NFTs. After 24 hours, Paramount will stop minting both of these collections.

Paramount says you can learn more about the designs of all these ships by watching the 2022 Star Trek Mission Chicago convention on April 8th. RECUR will air this upcoming discussion on its YouTube page at 1:45 PM CT.

No matter which pack a customer buys, each of these NFTs will cost $250 on the day of minting. Paramount says customers will store their NFTs in a new metaverse portal called “Star Trek Continuum.”

These starship NFTs are only the beginning of a larger metaverse game that Paramount is developing. Paramount plans to release “Star Trek” crew member NFTs during its upcoming “Series One” launch. Anyone who gets a “Series 0” NFT should see a free crew avatar NFT appear in their “Star Trek: Continuum” account.

Once everyone has their NFT space team, they could start exploring Paramount’s “Star Trek: Continuum” metaverse during “Season Two” and “Season Three.” The company claims NFT holders will have the opportunity to go on various quests and earn prizes like digital currencies or exclusive NFTs.

Outside of the “Star Trek” universe, Paramount has plans to release future NFTs from other media properties, including Nickelodeon. However, there’s no official word on what characters will be available in Paramount’s next NFT drop.

Anyone interested in joining Paramount’s first “Star Trek” drop could register on either paramount.xyz or startrek.xyz.

Will “Star Trek” NFTs be a win for Paramount Pictures?

It’s no secret that many “Star Trek” fans have reservations about Paramount’s “Series 0” NFT drop.

Some Trekkies are skeptical about how NFTs will bring the community together, and others express concerns over the environmental impact of crypto mining. Indeed, plenty of “Star Trek” fans contrasted the eco-friendly theme of “Star Trek IV” with the ecological effects of cryptocurrencies like Bitcoin.

As Rarity Sniper recently reported, many gaming companies like Ubisoft and EA have faced criticism for dabbling in NFTs. Gamers often argue that NFTs introduce an unnecessary expense and give players who could afford them an unfair advantage.

While the gaming industry will have to respond to these critiques, it’s also clear that many metaverse platforms are gaining popularity. Blockchain games like Axie Infinity, The Sandbox, and Decentraland continue to attract millions of players. So, at this point, it’s hard to say how Paramount’s “Star Trek” project will unfold.