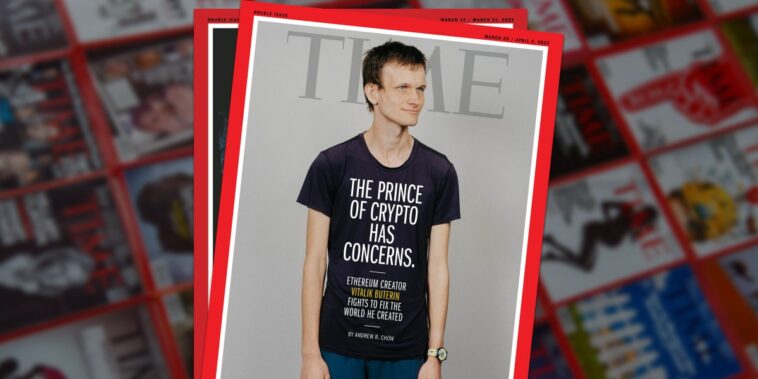 For the first “time” in history, TIME Magazine will publish an entire magazine issue as an NFT.

According to a recent press release, the March 23rd edition of TIME Magazine will be available as an Ethereum-based NFT. Unsurprisingly, the cover story for this magazine issue will be all about the future of the Ethereum blockchain.

The feature article in TIME’s upcoming NFT magazine is entitled “The Prince of Crypto Has Concerns” by metaverse expert Andrew Chow. The “prince” referred to in this title is Vitalik Buterin, one of the leading developers behind Ethereum. This historic TIME NFT magazine will feature a picture of Buterin on the cover.

TIME says it’s working with LIT DAO and the digital asset provider Circle to bring its NFT magazine into reality. LIT DAO will use its expertise in NFT technology to make TIME’s NFT magazine readable to people who own a copy.

TIME says it will drop copies of its first NFT magazine to select people who already hold a TIMEPiece NFT. Members of LIT’s “genesis community” may also find a TIME Magazine NFT in their Ethereum wallet address.

Known as a “culture-focused DAO,” the LIT project gained significant attention when it donated its LIT tokens to rapper Snoop Dogg in late 2021. Instead of keeping his estimated 50 billion LIT tokens, Snoop Dogg gave them back to the LIT community to create their DAO.

Since then, LIT became the first project to mint a full-length book NFT on Ethereum: Neil Strauss’s “Survive All Apocalypses.”

TIME has been one of the largest magazine publications to use NFTs and Web3 in its business strategy. As mentioned above, TIME now offers a unique TIMEPieces NFT collection and social media community. According to TIME, it has already worked with dozens of globally-renowned artists on this signature NFT collection.

In addition to their artistic merit, TIMEPieces NFTs have utility for holders. For instance, TIME claims at least 5,000 people who have a TIMEPiece NFT use it to access their TIME.com subscription.

All of these initiatives seem to be helping TIME’s bottom line. According to TIME executives, the company has already brought in an estimated $10 million from its NFT and Web3 projects.

Although TIME is one of the earliest magazines to jump into the NFT game, other prominent publications are taking notice. As Rarity Sniper recently reported, Billboard released three special edition magazine covers on the FTX US exchange. Sports Illustrated also released iconic magazine cover NFTs on the platform OneOf.